The "Red Copper Collection" of mint state and proof half cents and cents will be publicly displayed for the first time by Professional Coin Grading Service (PCGS) at the American Numismatic Association World’s Fair of Money® convention in Baltimore, July 30 – August 2, 2008. 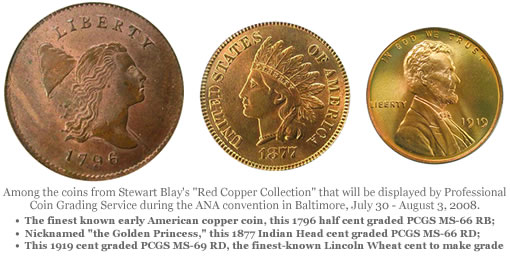 "It’s the finest collection of high-grade copper coins ever assembled, and some of these coins have never been publicly exhibited before.  There were many excited comments posted on the PCGS Message Board when the word started to spread that this legendary collection would be shown for the first time," said BJ Searls, Manager of the PCGS Set RegistrySM.

Blay is a sculptor who works in Colorado, Indiana and Italy, and also has acted in television commercials and soap operas.  He began collecting at the age of eight.

"I had a neighbor whose uncle worked for the (New York) Transit Authority.  He used to bring change home and we’d sort through it.  I started with Lincoln pennies and began to fill up an old Whitman folder," Blay explained.

In addition to the three coins mentioned above, the Red Copper Collection items to be displayed by PCGS at the ANA convention in Baltimore include:

"I’ve been a copper enthusiast from my early days of collecting, when Braided Hair half cents caught my eye because of their low mintages.  What Stewart has accomplished as a collector is simply incredible," said Ron Guth, PCGS President.

"Locating and preserving early American copper coins with any amount of original red color is a daunting challenge.  Collecting Indian and Lincoln cents with full red color is just as difficult.  Stewart’s tenacity and aggressive pursuit of the coins he loves has made him the ‘King of the Hill’ in U.S. copper coins."