The Royal Canadian Mint’s anniversary is celebrated with 5-ounce gold and 5-ounce silver coins depicting Ottawa Mint’s historic building, a special edition proof silver dollar featuring a maple leaf and loon, and a coin and stamp set containing a replica coin of 1908 fifty-cent piece — the Mint’s first coin — and stamp of its reverse. 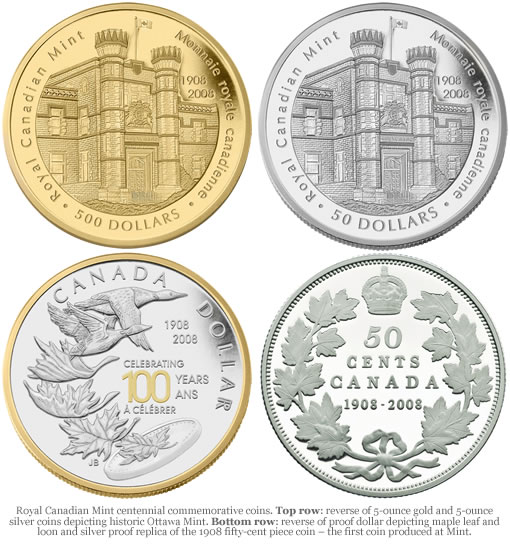 “Every commemorative coin produced by the Mint expresses a theme or ideal that reflects Canada’s heritage and values,” stated Mr. Ian E. Bennett, President and CEO of the Royal Canadian Mint.

“These magnificent new coins capture the essence of Canada’s world-renowned mint during our centennial year and we are pleased to offer them as part of the celebrations.”

With a proud tradition in both silver and gold coin production, the Mint is issuing four commemorative numismatic coins to celebrate its monumental anniversary, all of which are now available.

The exquisite craftsmanship and finish of the 5-ounce gold and 5-ounce silver coins enhance its design, the majestic architecture of the Ottawa Mint’s historic building on Sussex Drive. Bearing a face value of $500 and available for $8,159.95, the 5-ounce gold coin has been limited to a mintage of only 250.

Its silver counterpart has a $50 face value and also captures the essence of Canada’s world-renowned Mint. Four thousand of these coins have been produced and are available for $369.95 CDN.*

The 2008 special edition proof silver dollar features two iconic symbols of Canada: a maple leaf and common loon, one transforming into the other on the winds of change that have shaped the Mint’s success during its first 100 years.

Limited to a mintage of 25,000 and designed by Burlington, Ontario artist Jason Bouwman, selective gold plating adorns the reverse and the edge for a stunning effect. This coin is available for $59.95 CDN.

Coin and stamp set: replica coin of 1908 fifty-cent piece and stamp of its reverse 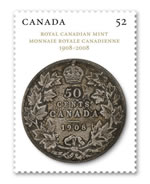 The 100th anniversary coin and stamp set, which is available for $44.95 CDN, includes a double-dated (1908-2008) sterling silver proof replica of the 1908 fifty-cent piece, which was the first coin ever produced at the Mint.

Housed in a protective mount, the companion postage stamp by Canada Post depicts the original reverse of the coin. Limited to a mintage of 16,000, each set also includes a full-color information booklet featuring vintage photos and historical facts about the Mint.

All of these and other products are available directly from the Mint at 1-800-267-1871 in Canada, 1-800-268-6468 in the US, or on the Internet at www.mint.ca. They are also available at the Royal Canadian Mint’s global network of dealers and distributors.

*Please allow four to six weeks for delivery of the 5-ounce silver coin.