More than 35 Other Winners in Heritage’s 2008 Survey, Including an ANA Life Membership 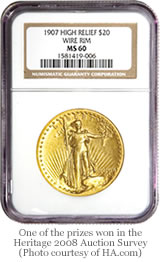 The winner of the Mint State High Relief Saint, who prefers to remain anonymous, had been collecting coins for more than 49 years, and is an ANA member.

“My fiftieth anniversary as a collector is coming up shortly, and receiving the telephone call from Heritage that a had won such a magnificent coin has started my celebration a little early! As a child, my father would give each of his five children a silver dollar for Christmas; my siblings were anxious to spend theirs as soon as possible, and as I seemed to always have the most money, I would often buy their cartwheels from them!

I guess the collecting bug started early with me. As a type collector, I have long been aware of the beauty and the significance of the High Relief Saint; I have always admired this coin, but had never had the opportunity to purchase one. I have been so thrilled that I cannot wait until it arrives! The former centerpiece of my collection was a gem 1836 Gobrecht Dollar, but that might change now!”

Another excited substantial winner in Heritage’s 2008 Survey was Ohio numismatist Tom Ciha. Tom, who has been a member of the ANA for nearly a decade, had the pleasure of deciding between an ANA Life Membership and one of the ANA’s Summer Seminar courses. He finally decided upon a Lifetime Membership. He added:

“In the time I have been a member of the ANA, I have been helped by ANA staff members with research information, coordination with dealers, and hobby updates that I feel were invaluable in the enjoyment of my hobby&. Again, I would like to thank Heritage for the lifetime membership prize and also for the quality of the Heritage Auction catalogs and the company professionalism I have experienced.”

“We are gratified by the thanks and the kind words of all of our winners,” concluded Heritage Co-Chairman Steve Ivy. “Our success over the years depends upon the professional relationships we have built with our clients, but we also enjoy the fun of notifying the winners of our Survey contest – and we know they enjoy receiving such calls!”

Images, descriptions, and prices realized from all of Heritage’s previous auctions are available in the Permanent Auction Archives at the Heritage website, HA.com.

Unfoutunatly I am not one who won High Relief $20 Saint-Gaudens Gold Coin. But I might someday I may own one! This coin maybe must have for any experianced collectors.