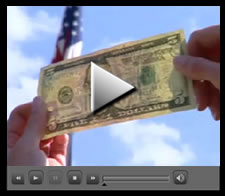 The newly redesigned $5 bill entered circulation March 13, 2008. While it will take time for everyone to receive their first $5, those that have seen it love it. Well, that’s what the Bureau of Engraving and Printing (BEP) is saying at least.

Based on their latest video showing consumer reactions to the $5, it’s a smash-hit.

For a new note that is promoted as being “safer, smarter and more secure,” building public acceptance and knowledge for the $5 is an absolute must. Hundreds of millions of the new notes will pass through people’s hands each year (1.4 billion $5s were produced in 2007). Reducing confusion during money transactions is better for everyone.

Fortunately for the BEP, the new $5s are like the U.S. state quarters and unlike the new Presidential $1 coins. Why is that? They are a complete replacement for an already used banknote. They have no direct competition. Presidential dollar coins must compete against the already popular and easy-to-use $1 bill.

Yet, that does not belittle the BEP’s public relations and marketing efforts for the new $5. Their pre-launch, actual release and continued efforts after release have been remarkable. The BEP’s consumer reaction video to the new $5 is simply the latest example.