James Monroe $1 Coin Covers are now available from the United States Mint. These limited edition covers include two Monroe Presidential $1 coins that were minted on the first day of production, January 3, 2008.

One dollar is from the Mint’s Denver facility and it will include the "D" mint mark and the other is from its Philadelphia location bearing the "P" mint mark.

The first day covers are priced at $14.95, plus $4.95 for standard shipping and handling. Only 50,000 have been made and there is a limit in place of 10 orders per household for at least the first 7 days.

In addition to the two $1 coins, the display card includes a 41 cent American Flag postage stamp with a postmark of February 14, 2008, Charlottesville, VA. The postmark date indicates when the James Monroe $1 Coins were first released to the public. 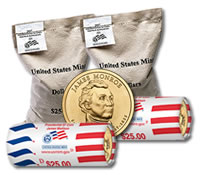 Monroe, fifth president and fifth in the presidential coins series

The James Monroe dollar is the fifth released coin in the presidential coin series honoring U.S. Presidents. It is the first for 2008. The following Presidential $1 coins will be released later this year:

The first four Presidential Dollars issued in 2007 had the image of George Washington, John Adams, Thomas Jefferson and James Madison.