Dallas, TX. The Official Auction of the ANA’s Phoenix National Money Show, presented by Heritage Auction Galleries March 6-7 has concluded, with prices realized close to $10 million; this marked Heritage’s 37th official auction on behalf of the American Numismatic Association. Prices realized from the 2,000 lots included in the event currently stand at $9,671,627; after adding proceeds from all Post Auction Buys, total prices are expected to exceed $10 million. Images, descriptions, and prices realized are currently posted at Heritage’s HA.com website. 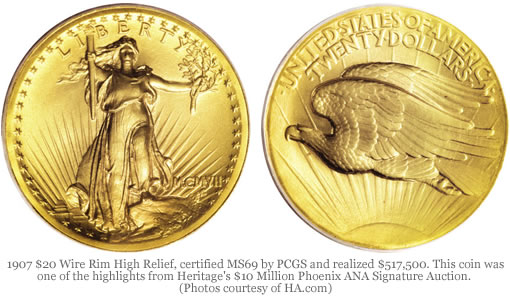 “As expected,” commented Heritage President Greg Rohan, “Phoenix will be remembered for the incredible gold proofs of the Ultra Collection, which realized in excess of $2.4 million. Bidding was furious on most of these wonderful coins, with the bidders in the room vying against strong bids from the Internet, telephone, and Heritage Live. The specialists and the type collectors who demand the very best had many coins from which to choose.”

Highlights from the auction include Lot 1766, a 1907 $20 Wire Rim High Relief, certified MS69 by PCGS, formerly in the Trompeter Collection and the Phillip H. Morse Collection of Saint-Gaudens Coinage, which realized $517,500.

The dies for this well executed, plain-edged pattern Cent were engraved by Peter Getz of Lancaster, Pennsylvania, based on designs of young English engraver John Gregory Hancock.

This coin is probably the only proof 1821 O-103 that exists; it has been documented as a proof for over half a century, and possibly long before that.

This is the rarest and most desirable Carson City Morgan dollar coined from 1878 to 1893. From The Oxford Collection.

During 1892, the San Francisco Mint struck precisely 100,000 pieces each month; they are noted rarities in better grades.

This coin’s overall visual appeal is solid, and the fields retain the vast majority of their modestly reflective luster. From The Oxford Collection. Ex: Mike Casper II.

The 1895 is easily the most discussed Morgan proof issue and the one that receives the most attention from numismatists. From The Oxford Collection.

It is possible that numismatists will never discover what happened to the missing 12,000 circulation strikes (or even if they ever existed).

The mintage of 1865 gold dollars was a minuscule 3,725 examples — among the lowest of the entire Type Three series; this is tied for the finest certified.

Only 87 proof gold dollars were struck in 1881; only two pieces have been graded PR67 Ultra Cameo, with none finer (1/08). From The Ultra Collection.

Christian Gobrecht’s Coronet gold design lasted more than a decade after the last appearance of the Liberty Seated design. NGC has graded none finer. From The Ultra Collection.

Two different obverse dies were used to manufacture the proof 1899 quarter eagles, even though only 150 proofs were produced. From The Ultra Collection.

The three dollar gold piece had gained immense popularity among collectors by the end of its duration. Only 2 certified finer. From The Ultra Collection.

The $3 denomination ended with the same law that eliminated the gold dollar. In 1889 there were 129 proofs struck, and this Ultra Cameo is the finest (and only) piece certified by NGC. From The Ultra Collection.

The reverse displays a large five-pointed star, with ONE STELLA 400 CENTS incused, and provided the name of the denomination. From The Ultra Collection.

Numismatic tradition is that 425 of these four dollar gold pieces were coined in 1879, but whatever the actual mintage, only 11 have been certified finer (1/08). From The Ultra Collection.

Unlike the more plentiful 1879 Flowing Hair stellas, the 1880 pieces are quite rare, with less than 20 pieces known. From The Ultra Collection.

Only three examples of this rare, underrated issue have been graded thus by NGC, with none finer. From The Ultra Collection.

The stated mintage for 1889 proof five dollar gold pieces dipped to just 45 pieces, and only one has been certified finer. From The Ultra Collection.

Only 75 pieces of the proof 1894 $5 were struck, and only 20 to 30 coins are known in all grades; this is the finest certified by either service. From The Ultra Collection.

This 1899 proof half eagle is the finest example–by two grade points–that Heritage has offered. From The Ultra Collection.

In 1899, 99 proof half eagles coined in Philadelphia, and this is among the finest survivors.

In either proof (30 pieces) or business strike (1620 pieces) format, the 1872 is a formidable rarity. Only two certified finer. From The Ultra Collection.

Former Bass, DiBello, Atwater example, now from The Ultra Collection. This is the only certified PR66 Ultra Cameo, with only one finer (1/08).

This is one of just two such pieces certified at NGC, with only two certified finer out of a mintage of 86 pieces. From The Ultra Collection.

Beginning with the 1902 proofs, alterations to Mint techniques resulted in lessened frost on the device areas of the dies. Only two certified finer. From The Ultra Collection.

The 1906 is one of three proof Liberty eagles (with the 1902 and 1905) that are distinctly scarcer than the rest of their 20th century brethren. From The Ultra Collection.

Saint-Gaudens modeled this side-view portrait of Liberty’s head after the head of Victory (Athena Nike) from his General Sherman monument in NYC. One of only 500 minted.

It was 1908 before the new Indian Head design saw full-scale production at the branch mints, and then only 59,850 specimens were struck. This is among the finest survivors.

Of the 17,741 1861-O pieces coined at the New Orleans Mint, only 5,000 were struck under the authority of the United States, with 9,750 double eagles for Louisiana as an independent state, and 2,991 under the auspices of the CSA. Only two certified finer.

Only 103 proofs were produced, and perhaps 30 existing today; this is a spectacular, deeply mirrored example. From The Ultra Collection.

The mintage for the 1899 proof twenty is recorded as 84 pieces, but it is likely that less than 30 pieces exist. From The Ultra Collection.

This is the finest known among probably 50 examples known, and the sole PR66 Ultra Cameo at NGC. From The Ultra Collection.

Any proof coin dated 1901 that has even a trace of cameo contrast is an important item.

The 1904 double eagle may be the most common proof date (with 98 minted), but this is the only example to be certified Ultra Cameo by NGC. From The Ultra Collection.

Mint Director Leach had the pieces struck to satisfy President Roosevelt’s desires for high relief coinage, all the while realizing that the design was impractical for modern, one-blow circulation coinage. None have been certified finer. Ex: Trompeter Collection; The Phillip H. Morse Collection of Saint-Gaudens Coinage.

An extraordinary example of the most coveted 20th century gold issue. From The Ultra Collection.

1907 $20 Gold High Relief Proof Coin is the Numismatist’s favorite coin. This mint state 69 almost perfect condition. Must have for champion coin collector. You never completed your coin collection with this coin!