IRVINE, Calif. – Bowers and Merena Auctions, America’s leading rare coin auction house, delighted World coin enthusiasts in Baltimore and across the globe on March 1 with an action-packed special session of World/Ancient Coins as part of their first of three Official Auctions of the Baltimore Coin and Currency Convention for 2008. 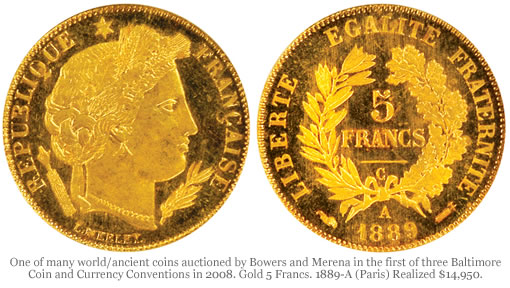 The World session was the grand finale of the four-session auction that realized a total of $9,764,934 and saw more than 3,200 lots cross the auction block. The World/Ancient session realized 2,155,414.

“I have to say we are ecstatic with the results of this Baltimore auction, and especially the World session,” said Steve Deeds, president of Bowers and Merena. “Our worldwide marketing and advertising efforts helped draw hundreds of new international registered bidders to Bowers and Merena and really created a buzz throughout the global numismatic community.

Additionally, Deeds attributes the overwhelming success of this World session to a variety of other factors, as well.

“We took full advantage of available means of bidding in order to make it as convenient as possible for our international and even domestic customers who could not be in the room with us. We had very active phone bidding, plus live online bidding through the Bowers and Merena website, eBay Live Auctions and Proxibid, which were all very successful.

The convention itself was outstanding as usual thanks to the undying efforts of Mary Counts, David Crenshaw and the Whitman team, which certainly kept the auction room full and very exciting.”

“This was the largest collection of Patterns, Essais and Trial Strikes sold in the United States in the past 30 or 40 years,” said Ron Gillio, numismatic acquisitions coordinator and World coins specialist for Bowers and Merena.

“I personally spoke with several dealers who were astounded by the selection. A few of the French dealers made the comment to me that they had never seen this many of these types of coins at one time and probably would not see it again.

I spoke with a Japanese dealer after the sale who said he could not believe his eyes to see the prices realized. It is my opinion that the catalog will become a standard reference, especially for Chinese and French Patterns and coins.”

“The Chirico Collection was the result of a lifetime of collecting efforts and many of these coins had not been available to the collecting community for decades,” Deeds added.

“The enthusiasm for this collection was remarkable, starting months ago as we promoted the collection and displayed the highlights at various coin shows. Many lots in the collection realized far more than their printed value estimates in the catalog.” 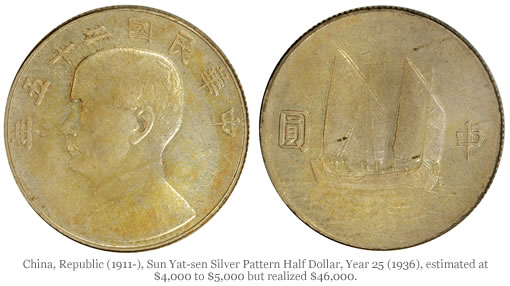 “I am especially pleased to report that Mrs. Chirico attended the sale personally and was amazed by all the activity,” said Gillio. “When I called her after the sale she said she could not believe the prices and was shaking with excitement, very pleased with the performance of the auction and with how we had handled everything.

She felt that we at Bowers and Merena were true to our word about the worldwide interest this collection would generate. The collection was very sentimental to her family, and it was important to her that her husband’s legacy be shared with others who were equally enthusiastic about collecting World coins.”

“We are extremely happy to be back in the business of World numismatics,” said Deeds. “Bringing coins and currency together from the world over is something very special. We are already looking forward to our future World auctions, and I am pleased to announce a truly outstanding collection of Chinese currency from Eduard Kann will highlight our November Baltimore auction. We see this March session as just the beginning of Bowers and Merena making history in the World coin and currency arena.”

Prices realized for all lots in the Bowers and Merena Official Auction of the Baltimore Coin and Currency Convention are available online at www.bowersandmerena.com. This is the first of three Baltimore auctions by Bowers and Merena in 2008, continuing their longstanding and ongoing association with the convention – the next is scheduled for June 4-8 followed by November 19-23. Bowers and Merena will conduct its Chicago Rarities Sale in Rosemont, Ill., on April 15 prior to the Central States Numismatic Society Convention.

For more information about Bowers and Merena and the Official Auction of the Baltimore Coin and Currency Convention in February/March, call 800.458.4646.  For media inquiries, ask for President Steve Deeds.  Complete prices realized for all past auctions are available at www.bowersandmerena.com.

Dear Sir, i have a few of these rare chinese silver dollars, how do i sell them or get them auctioned off? Respectfully, D.Moeller