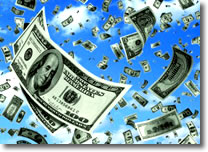 Making currency is no small task in such volume. Spread across the 29 days in February and counting weekends and holidays, that averages to nearly 22.5 million notes per day with a face value of approximately $475 million.

While that is certainly a lot of cash, the Bureau of Engraving and Printing indicates 95% of the notes printed each year are used to replace notes already in, or taken out of circulation. If this percentage is run across the February totals, then "new or extra" notes for circulation is slashed down to $23.8 million per day.

Naturally, printing notes is simply a small slice of what keeps an economy going. The U.S. national debt increasing to $1.67 billion per day, as indicated by the U.S. National Debt Clock, clearly points that out. A country does not have to make physical money to spend it …

That means that roughly half the notes printed are $1 bills that wear out in an average of 18 months or so. Does this make ANY economic or practical sense?

Get rid of the one, print more twos, reintroduce the half-dollar, and let’s use those billions of $1 coins that the Mint keeps churning out. Canada did it, the EU did it, England did it, Australia did it …