January 1, 2009 is the 10th anniversary of the first use of euro currency and of the Economic and Monetary Union (EMU). An estimated 90 million 2-euro commemorative coins will be issued to celebrate the decade and anniversary. And more interesting, the coins will have a common design that was voted on and selected by the public.

The votes are in and counted. The final coin design selected by the public is a drawing of a stick figure blending into the euro symbol. Starting in January 2009, the minted commemorative coins will be issued throughout all euro-area countries.

The design selection process first began with Mints of the euro area creating their best designs in a competitive challenge. Mint Directors then judged the designs and selected their top five. Using these five designs, EU citizens and residents had from Jan. 31 through Feb. 22 to vote online and select the commemorative coin design of their choice. 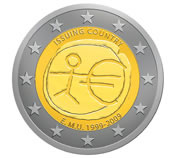 According to an EU statement announcing the winning commemorative coin,

The winning design symbolises that the euro is the latest step in the long history of trade, from pre-historic barter – evoked by the deliberately primitive design – to economic and monetary union.

The design was created by Mr George Stamatopoulos who is a sculptor at the Central Bank of Greece.

Commemorative coins always have a value of 2 euro, but this will only be the second time euro-area countries issue a coin with the same design also on the national side. The first was the commemorative 2-euro coin celebrating the 50th anniversary of the Treaty of Rome in 2007.

This winning design on 2 Euro Coins I would be collecting one of these coins next year! So get ready to order this coin next year!