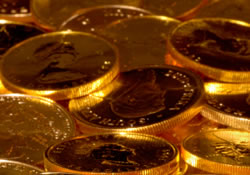 Gold reached a new record peak just yesterday at $916.10 on the New York Mercantile Exchange (NYMEX). Today, corrections appear to be in order. Profit taking came into the mix after the dollar gained strength against the euro and oil prices declined.

Many analyst had indeed forecasted corrections occurring shortly after gold went above $900 an ounce.

Not to be cynical, but given there are market analysts on both sides of the fence and standing on top of it, a percentage of predictions are bound to be right some of the time.

While gold falls, reports are already out on expectations of it rising again after short-term price corrections. In a Reuters article, Suki Cooper, metals analyst at Barclays Capital, was quoted as saying:

“Given the speculative length, there is potential for short-term price corrections. However we would view these in the context of what remains a strong medium-term uptrend, buoyed by positive external drivers as well as constrained mine supply.”

Should this latest gold adjustment stand ground, many would prefer movement – in either direction – to be slower, gradual and sustained.