IRVINE, Calif. – Teletrade, America’s largest fully automated Internet auction company for certified coins and currency, announces the record-setting sale of an 1899 “Black Eagle” Silver Certificate. Bidding on the note advanced to $30,000 during Teletrade’s December 10 auction, but the note did not meet the reserve.  A day after the sale, Teletrade sold the note to a private buyer who was previously unavailable during auction bidding. 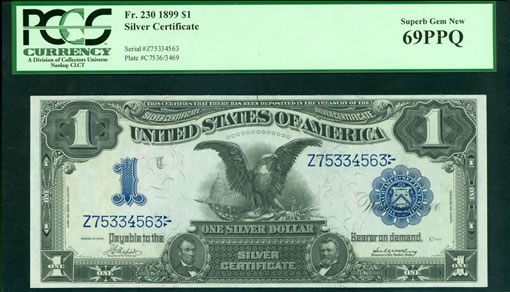 Teletrade is not releasing the final price the buyer paid or the identity of the buyer, but will confirm the sale price was in excess of $30,000. According to Ian Russell, president of Teletrade, “This note sets records as the highest price paid for a non Serial Number One ‘Black Eagle,’ and it is the second most expensive for the type.”

This impressive note was a record-holder even before the sale, in addition to its record sale price, as it is the first large size type note of any design to receive the grade of “69PPQ” from PCGS Currency.

This magnificent note duly impressed every one of our graders who examined the note, and the grade of Superb Gem New 69PPQ was unanimous," stated Jason W. Bradford, president of PCGS Currency, before the sale. "The centering and margins are nearly perfect, and the paper quality is tremendous without any noticeable handling or counting marks. The originality is unquestionable, and the bold embossing is evident to even the casual observer."

The "Black Eagle" Silver Certificate series of 1899 is one of the most popular U.S. Currency designs among collectors, and is one of the more commonly encountered large size notes found in Gem New condition. "Even 66PPQ and 67PPQ examples of this type are not rare," Bradford said, "and we even expect to see 68PPQs on occasion as this is not a rare note in lower Uncirculated grades. We were surprised, however, by the virtual perfection of this example. We felt that this note was the first we’ve seen of any large size type note in our first three years of grading to deserve the 69PPQ grade. We do not take our responsibility to award extremely high grades lightly, and this is the first we’ve seen that put our doubts and inquisitive eyes to the test."

According to PCGS Currency vice president Laura A. Kessler, the "69PPQ" Silver Certificate was submitted for grading by an anonymous submitter and consigned to the Teletrade sale.

"Our graders, of course, have no knowledge of the identity of the submitter when they examine a note. This note met every qualification of the grade as defined by the PCGS Currency Grading Standards, and even after close individual inspection by the professional graders everyone agreed upon the final grade. We were delighted to finally grade a large size type note this close to perfection. Once the grade was finalized and the note was holdered, the submitter was called and given the news, and they were understandably ecstatic."

Aside from the extraordinary condition of the note, Russell partially attributes its successful sale to the growing popularity of Registry Sets among currency collectors.

“For years coin collectors have been building incredible Registry Sets, devoting significant amounts of time and money in order to bring together the best possible specimens to complete a set,” he said. “The same can now be said for currency collectors, which is very exciting for the industry. Similar to coins, the highest graded notes with low populations are selling for premiums to gain the best Registry Set rankings.”

Established in 1986, Teletrade is the largest and most active marketplace for certified coins and currency with more than 160,000 registered bidders and over 300,000 lots featured in our auction system each year. Teletrade offers 25,000 to 30,000 coin and currency lots each month in auctions held every Sunday, Monday and Wednesday, plus special event sales on advertised Thursdays. Visit www.teletrade.com for detailed information on auctions and prices realized, or call 800.949.2646 to speak to a representative.