Bowers and Merena Auctions was the Official Auctioneer in the recent Baltimore Coin and Currency Convention. It proved to be an exciting show realizing more than $9.5M and having over 3,000 coin and over 1,000 currency lots.

Some exceptionally exquisite coins were auctioned, including a $368,000 1854-O Liberty Double Eagle graded AU-50 by PCGS and a 1916 Buffalo Nickel Doubled Die Obverse in PCGS MS-64 that realized $316,250. The truly fine coins – the best at the auction – were only two from a strong list of excellent coin offerings at the Baltimore event.

Included is the Bowers and Merena Auctions release with their record breaking results. Also shown are excellent, must see photos of the two already mentioned coins.

Over 4,000 Lots Crossed the Block to Realize Bowers and Merena’s Highest Baltimore Sales Record in Years

“I can hardly find words to say how happy we are with the outcome of this auction,” said Steve Deeds, President of Bowers and Merena. “We offered more lots than in any of our previous auctions, each of the four sessions was filled with very active bidding, and we were able to offer some truly amazing coins and currency. It was by far our best Baltimore showing and I am really looking forward to what the 2008 Baltimore auctions will bring. We also especially want to acknowledge and thank Mary Counts, David Crenshaw and the entire Whitman team for their support and production of a first-class convention where Bowers and Merena is proud to be the official auctioneer.”

“It is always an honor to auction a coin that is as truly exceptional as this one. A coin of this magnitude does not come around very often, and I am proud to say this is the second example of this rare coin that Bowers and Merena has sold this year,” remarked Deeds.

At the Milwaukee Rarities Sale in August, Bowers and Merena auctioned an 1854-O Liberty Double Eagle graded AU-55 by PCGS that realized $494,500. 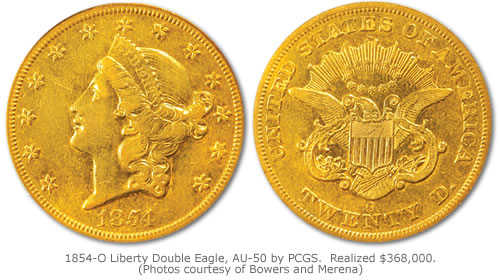 Another spectacular lot that sold in Baltimore was Lot 683, a 1916 Buffalo Nickel Doubled Die Obverse in PCGS MS-64 that realized $316,250. It is tied with one other MS-64 as the finest of only five Mint State 1916 Doubled Die Obverse Nickels listed on the PCGS Population Report.

“This coin possesses uncommonly sharp striking definition, beautiful peripheral toning and the strongest technical quality and eye appeal that we have ever seen in an example of this extremely rare 20th century U.S. Mint error,” Deeds said. 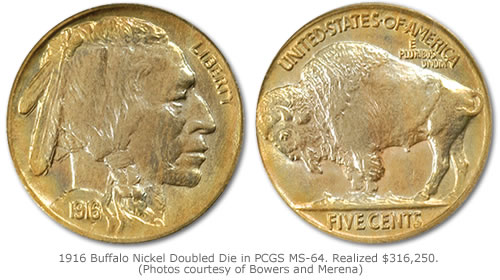 Prices realized for all lots in the Bowers and Merena Official Auction of the Baltimore Coin and Currency Convention can be viewed online at www.bowersandmerena.com, or call 800.458.4646 to request a printed list.

Bowers and Merena’s next auction is the Orlando Rarities Sale held prior to the Orlando F.U.N. Show on January 8, 2008. That will be followed by the Bowers and Merena Collector’s Choice Auction, February 4 to 13, 2008, in Irvine, Calif., and the next Official Auction of the Baltimore Coin and Currency Convention, February 27 to March 2, 2008. The complete auction schedule with consignment deadlines is available at www.bowersandmerena.com.