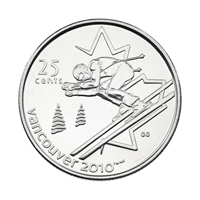 The coin is the fifth in a series of 17 circulating coins to be made, and the last one to be released this year.

The RCM press release announcing the launch indicates up to 22 million of the coins will enter circulation through the RBC Royal Bank and participating Petro-Canada outlets.

Of the coin itself, Ian E. Bennett, President and CEO of the Royal Canadian Mint, said:

“Alpine skiing is yet another sport the Mint is proudly celebrating as part of its extensive Olympic coin program. As we look ahead to the next two years, the Mint will continue to offer Canadians from coast to coast the unique opportunity to collect a piece of the Games.” 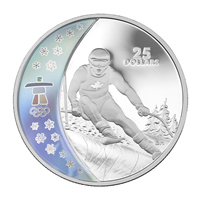 The obverse or front of the coin has the portrait of Her Majesty Queen Elizabeth II. The reverse has a portrait of an alpine skier, a stylized maple leaf and the words ‘Vancouver 2010’.

A sterling silver version of the alpine skiing coin is also available to collectors for $69.95 (CN). The design is different from the circulating coin, featuring a specialized hologram and $25 face value.

These collector coins, along with a first day circulating coin ($15.95), and regular 25-cent rolls ($16.95) are available at the Royal Canadian Mint website or through authorized coin dealers. You can also order through the Mint by phone at 1-800-267-1871.

[…] days ago, on October 24, the Royal Canadian Mint (RCM) released 25-cent alpine skiing coins to the public. These coins commemorate the Vancouver 2010 Olympic and Paralympic Winter […]

How many of the 2007-10 souvenir quarters have been released todate, and which ones are there.thanks