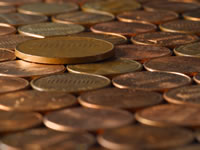 We’ve all stored change now and again. But few can claim the prize of hoarding coins for 7 years with the intention of buying a big screen TV and DVD player.

That’s exactly what Tim Thraves, a man from Hillsboro, did and plans to do.

Real coin collectors or numismatist, those who study and collect coins for that enjoyment alone, may feel some dismay, but also amusement.

Many collectors have a hard time parting with their collection. But if you’re going to give it up, few – well, at least most men – would argue against Thraves’ decision.

Amazingly, Thraves came up with the idea through a friend. Thraves’ friend has a coin collecting story of his own. He saved change for 16 years. Using that money alone, he purchased a car for his son’s 16th birthday.

In friendly arguments between the two, who can claim getting the best deal?

You can read the full story from kgw.com, Northwest NewsChannel 8.