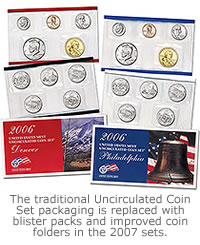 They’re not the home run makers in the series of Mint coinage but they do make a big hit every now and again… The 2007 Uncirculated Coin Sets are almost up to bat.

They’re on deck, in fact. Standby because on October 9th, you can purchase them through the United States Mint.

Them? In short, a complete set of 2007 uncirculated coins from the U.S. Mints at Denver and Philadelphia. The sets are a special breed of coins many collectors like to own because they’re different.

The Mint describes uncirculated as:

Price changes for the 2007 Uncirculated Coin Sets and improved packaging

At first blush, it looks like the Mint increased prices. However, although the price has gone up by $6, the new set reflects a better comparative deal. 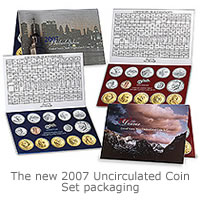 Why? The 2007 coin sets are different from previous years:

The addition of the 8 Presidential $1 Coins, by themselves, reflects the improved pricing.

The coins included in the 2007 Uncirculated Coin Set

If you’re unfamiliar with the United States Uncirculated Coins Set® and what they include, here’s a table showing the 28 coins that are in the 2007 set:

Time closing for the 2006 Uncirculated Sets and 2007 ordering details

Nearly 925,000 of the 2006 Uncirculated Sets have been sold so far. With the improved packaging and extra coins, there’s a good chance the 2007 set will show better mintage numbers this time next year, even though they’re a few dollars more. Of course, that’s pure speculation at this point…

If you haven’t already, you can still purchase the 2006 Uncirculated Coin Set, but you better hurry. The US Mint normally removes them for sale when the new sets are made available.

Why does the Sacagawea coin not have e.pluribus unum and in God we trust or the date stamped on the outer parameter of the coin???