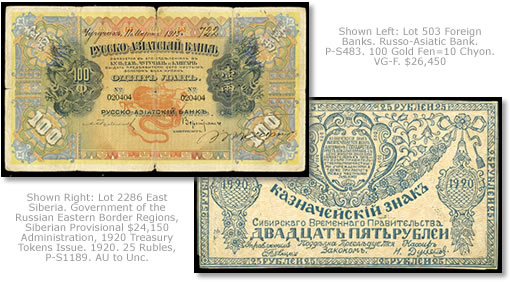 Consisting of more than 2,100 total lots, the auction realized $1,119,585. It was held at the Hilton Times Square, with live auction simulcasts in Hong Kong and Germany. The auction was spearheaded by Bowers and Merena in conjunction with sister companies John Bull Auctions, Ltd., of Hong Kong, and Heinrich Köhler Auktionshaus of Germany.

The auction is compiled of two premier collections, "The East Bay Collection of International Banknotes" and "The Eduard Kann Chinese Banknote Collection," consisting of more than 2,000 total lots.

It will be held at the Hilton Times Square, with live auction simulcasts at the John Bull Auctions offices in Quarry Bay, Hong Kong, and the Heinrich Köhler Auktionshaus offices in Wiesbaden, Germany. Pre-auction lot viewing will be available in multiple locations around the world, including California, Germany and Hong Kong, as well as at the Maastricht Paper Money Show in the Netherlands, the PCDA Paper Money Convention in St. Louis, Mo., and prior to the auction in New York.