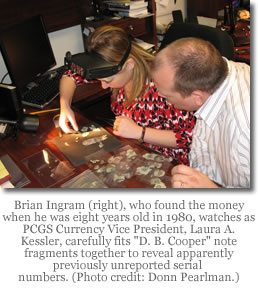 During the recent examination and certification of recovered money from the famous 1971 "D. B. Cooper" skyjacking case, PCGS Currency staff members discovered nearly three dozen serial numbers that apparently had not been previously recorded by the Federal Bureau of Investigation.

The numbers were hidden in layers of notes and note fragments stuck together for decades, and those numbers now have been reported by PCGS Currency President, Jason Bradford,  to the Seattle-based FBI agent overseeing the case.

In a letter to FBI Special Agent Larry Carr, Bradford wrote: "Earlier this month, members of our team examined two dozen environmentally-damaged $20 denomination Federal Reserve Notes and dozens of fragments submitted to us for certification by Brian Ingram of Mena, Arkansas.  As you know, Mr. Ingram was the then-eight year old boy in 1980 who discovered some of the cash given in 1971 as ransom to a skyjacker known as 'D. B. Cooper' or 'Dan Cooper.'"