The number one-ranked collection of United States large cents in both the PGCS and NGC Set Registry listings will be publicly displayed for the...
Read more
Banknotes or Currency Articles

Numismatic Theatre, a popular part of the American Numismatic Association's convention education programs, has been finalized for the 2010 ANA World's Fair of Money,...
Read more
Banknotes or Currency Articles

One of the three known proof 1804 Eagles made on behalf of President Andrew Jackson and a rare 1804 Eagle silver pattern have been acquired by Legend Numismatics of Lincroft, New Jersey and sold to a Texas collector. 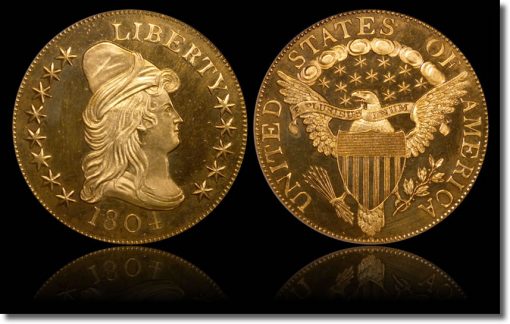 Both coins will be publicly displayed together for the first time at the upcoming American Numismatic Association World's Fair of Money convention in Boston, August 10 - 14, 2010.

Two leading experts on the acquisition and trading of gold coins and bullion will provide a wealth of inside information on those subjects...
Read more
Coin & Numismatic News

An $18 million display of two rare Double Eagles accompanied by Boston-related early Americana will be one of the exhibit highlights in the Museum Showcase area at the American Numismatic Association World's Fair of Money convention in Boston, August 10 - 14, 2010.

The 1861 Philadelphia Mint "Paquet Reverse" gold $20, graded NGC MS67, was formerly in the famous Farouk and Norweb collections. Not known to exist until 2006, the gem proof 1921 Saint-Gaudens Double Eagle, graded NGC SP64, is insured for $8 million. Both rare coins will be displayed at the ANA World's Fair of Money in Boston courtesy of Brian Hendelson of Classic Coin Co. (Photos courtesy of Numismatic Guaranty Corporation.) - Click image to enlarge