Although snow isn't readily available in most parts of Canada at this time of year, the Royal Canadian Mint is inviting Canadians to celebrate an exciting winter sport with the latest circulation coin in its Vancouver 2010 collection -- the 25-cent coin featuring bobsleigh. 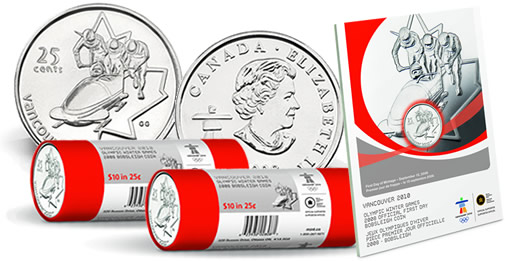 "Today marks only 234 days until Vancouver hosts the biggest sporting event in the world," said Ian E. Bennett, President and CEO of the Royal Canadian Mint. "Through our innovative circulation coin program, the Mint is providing Canadians from coast to coast to coast with a unique way to collect a piece of the Games, which will serve as a lasting reminder of this extraordinary moment in our country's history." 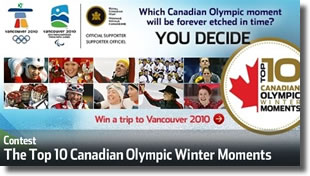 The Royal Canadian Mint and Canada's Olympic Broadcast Media Consortium are inviting Canadians to vote on the Top 10 Canadian Olympic Winter Moments of all time. 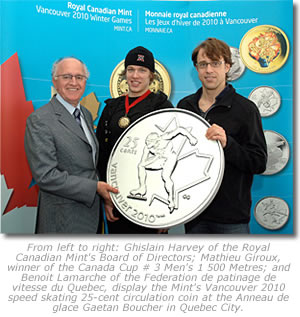 The Royal Canadian Mint is releasing the latest circulation coin in its Vancouver 2010 collection – a 25-cent coin featuring the sport of speed skating. The coin was officially launched today at the Canada Cup #3 speed skating event in Quebec City, which is being held at the Anneau de glace Gaétan Boucher.

"Some of Canada's most memorable Winter Olympic moments involve thrilling victories in speed skating and the Mint is delighted to celebrate this sport in such a unique way," said Ian E. Bennett, President and CEO of the Royal Canadian Mint. "As we look forward to the Olympic speed skating competition next February at the Richmond Olympic Oval, we invite all Canadians to keep this special coin as a way to build momentum for the Games."

Tokyo, Japan – With a little over one year to go before the next Olympic Games, Taisei Coins Corporation is excited to...
Read more
Canadian Coins & Royal Canadian Mint News

OTTAWA — The Royal Canadian Mint's newest coin in the Vancouver 2010 collection is here! The sport of figure skating is depicted on the coin, which is the ninth of 17 circulation coins to commemorate the Vancouver 2010 Olympic and Paralympic Winter Games. The launch of the coin was celebrated yesterday in Vancouver with area youth and Vancouver 2010 mascots Quatchi, Miga and Sumi.

Ottawa, Ontario – With the Beijing Olympic Games and Beijing Paralympic Games just around the corner, the Royal Canadian Mint is proud to issue...
Read more
123Page 2 of 3