Tags Tales and Legends in Austria

Tag: Tales and Legends in Austria

To celebrate the Winter Games, the Austrian Mint in Vienna has issued two silver 5 Euro coins. Each displays a winter discipline in which Austria is a world-leading performer.

The first has as its theme ski jumping. One sees the helmeted ski-jumper captured in his flight from the end of the steep ramp against a background of trees in an alpine forest. The second design shows a female snow-boarder as she performs a hair-raising air trick, flipping her snowboard up over the rim of the half-pipe in which they perform.

The Austrian Mint in Vienna is issuing the second coin in its €10 silver commemorative series "Tales and Legends in Austria". The theme of...
Read more
Austrian Mint 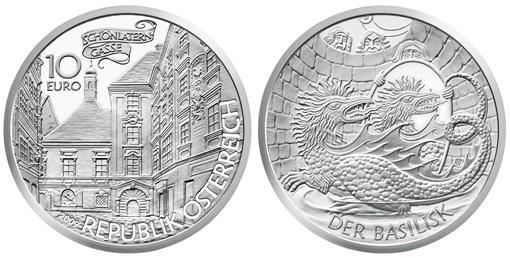 The story goes that in the year 1212 a baker's boy in a shop in the Schönlaterngasse (Lovely Lantern Lane) No. 7 discovered a horrible monster at the bottom of a well. The stench and poisonous fumes of the creature killed all those who inhaled them.