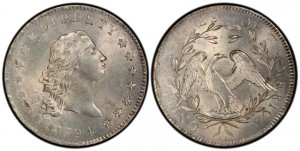 A 1794 Flowing Hair U.S. silver dollar, owned by collector Bruce Moreland and formerly owned by the Cardinal Collection Educational Foundation, now has been sold by Legend Numismatics, Inc. of Lincroft, New Jersey for "in the area of $1.5 million," according to Laura Sperber, Legend President. The coin is graded PCGS Secure Plus™ MS63+ and is CAC certified.

Only 1,758 silver dollars were recorded minted in 1794, the first year of production for that denomination at the United States Mint. PCGS CoinFacts estimates only about 150 survive today with less than a dozen in mint state [...] 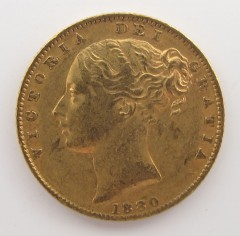 Woolley & Wallis, the Salisbury (U.K.) Fine Art Auctioneers, who are including an increasing number of coins and medals in their sales, are to offer three extremely rare gold Imperial Sovereigns struck at the Sydney Mint in Australia in 1880.

During one of their regular Valuation Days the auctioneers received a consignment of 150 coins dating from 1843 to 1887.

Outwardly they appeared to be a fairly standard group, but on examination three of the 1880 coins display an error by the Mint in spelling the Queen's name VICTORIA -- an inverted 'A' has been used in place of the 'V' [...] 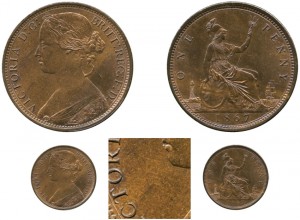 The first of Baldwin's (www.baldwin.co.uk) two official Coinex auctions will be held on the 28th September this year and will include a spectacular selection of Ancient and British Coins, Military and Commemorative Medals and South African Banknotes, Coins and Medals.

Numerous lots in the sale carry some fascinating historical references and are sure to attract a great deal of interest from collectors. Taking place at the CIPFA Conference Centre the auction will be well attended as buyers fly in from around the globe for the Coinex fair arranged by the BNTA.

As Baldwin's celebrated their 25th year of trading in the Orient bidders came out in force to ensure that this pinnacle auction was an outstanding success.

The one day sale achieved an amazing, $5,256,675 (including buyer's premium,) the highest total of any of Baldwin's sales in the Orient and a fitting result for our 51st auction.

"It is magnificent to have achieved such a fantastic result from this sale and the perfect outcome to our 51st auction and our celebration of 25 years in the Orient," Edward Baldwin, Baldwin's Chairman commented after the sale.

Held at The Holiday Inn Golden Mile in Kowloon, in conjunction with the [...] 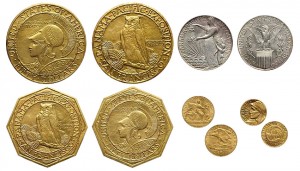 Bonhams is pleased to announce a stellar result for its September 4, 2011 auction of rare coins and medals. The sale brought more than $1.4 million over the Labor Day weekend.

Highlighting the holiday auction were gold coins from the Estate of Hellen and Charles Mapes, of Reno, NV. The eponymous Collection, once owned by the famed hotel and casino mogul Charles Mapes, included a rarely seen, high grade 1870-CC Liberty Double Eagle gold coin. This date and mint are well known to numismatists as the top Carson City rarity in the Liberty Double Eagle series. In fact, it is the rarest of all CC gold coinage [...] 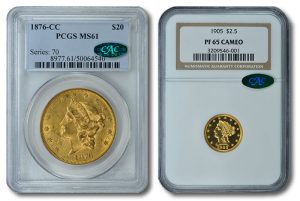 One of the many highlights of the month was the Anacapa Collection of U.S. gold coins, which realized $202,178 with a sell-through rate of 96%. This collection included several U.S. rarities, notably the 1866-S Liberty Eagle No Motto NGC AU-55 and 1907 Saint-Gaudens High Relief NGC MS-64 [...]

Bonhams is pleased to announce the addition of a highly sought after five-piece Panama-Pacific coin set to the September 4, 2011 auction of Rare Coins and Medals.

Created to commemorate the opening of the Panama Canal and the workmen that created it, the coins graced the 1915 exposition in San Francisco in celebration of the monumental event.

Filled with rarities, the sale also contains a collection of gold coins from the Estate of Hellen and Charles Mapes, of Reno, Nev. Once owned by the famed hotel and casino mogul Charles Mapes, the offering includes a rarely seen, high grade 1870-CC Liberty Double Eagle coin [...]

Stack's Bowers Galleries proved the current strength of the coin and currency market last week by realizing an astounding $40,084,165 at the Official Auction of the ANA World's Fair of Money, with U.S. coins realizing over $29.9 million of the total.

The only official ANA auction in Chicago presented more than 9,000 lots of U.S. and world coins, paper money, medals and tokens over 11 sessions, August 13-20, 2011, at the Donald E. Stephens Convention Center in Rosemont, Illinois, a suburb of Chicago [...]

Stack’s Bowers and Ponterio To Offer 2,700+ Lots of Chinese and East Asian Coins and Banknotes 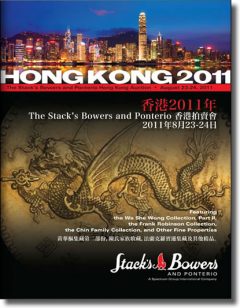 Stack's Bowers and Ponterio will present an exceptional selection of more than 2,700 lots of Chinese and East Asian coins and banknotes at The Mira Hong Kong, August 22-24, 2011, HKT.

Interested bidders are invited to join the live auction at The Mira in Kowloon, Hong Kong, or to bid online at www.stacksbowers.com [...]

Baldwin's are celebrating their 25th year holding auctions in the Orient this year and this, the 51st auction for the group, is set to be a sale to remember.

The sale, which will be held on the 25th August at the Holiday Inn Golden Mile, Kowloon, comprises 1064 lots of far eastern and world coins and banknotes, many with exceptional provenance and of extreme rarity.

The Hong Kong Coin Auction group was started in 1986 by B H Lim of Taisei Singapore, Andre de Clermont and Daniel Fearon of Spink, London. Baldwin's were involved from Auction No 1 as [...]