Dallas, TX. Heritage Auction Galleries has set the record for the most valuable ANA Auction ever! Significant and classic rarities from all series in American numismatics, most of them offered in the Platinum Night catalogs, smashed the previous record of $27.7 million set last year at the Milwaukee ANA event. 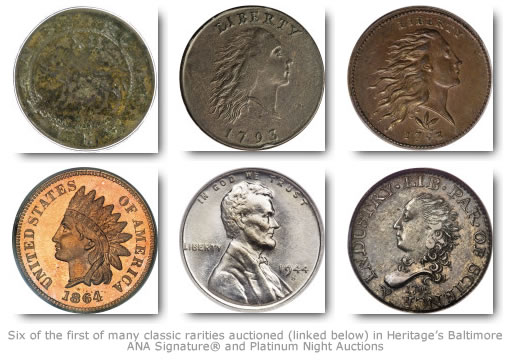 The auction was held in Baltimore July 30 - Aug. 3, in conjunction with the World's Fair of Money summer convention of the American Numismatic Association. Total prices realized for the American coins are currently $41,022,713, and will rise further when the post auction buys are finalized.

"This was Heritage's 38th Official ANA Auction, a record in itself!" enthused Heritage C.E.O. Steve Ivy.

"We were very pleased with our results in Milwaukee last year, and we think Baltimore has demonstrated the absolute strength of the market for important and high quality coins. Such high prices realized also mean a record-setting check will be provided to the ANA to support their educational and membership programs.

We also take great pride that our total was 50% higher than our previous ANA record, and double that accomplished by any other ANA auctioneer. Heritage delivered for the ANA."

Dallas, TX. Significant and classic rarities from all series in American numismatics are available in Heritage's Platinum Night catalog for the Official Auction of the Baltimore 2008 ANA World's Fair of Money®. The auction will be held in Baltimore July 30 - Aug. 3, with Platinum Night on July 31, 2008. The auction is now posted by Heritage Auction Galleries on their HA.com website, and all lots are available for inspection and bidding. 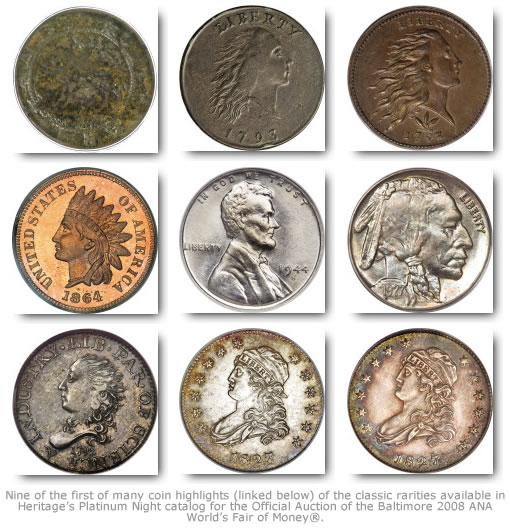 "The great rarities included in this auction are dazzling," commented Heritage President Greg Rohan, "and in such a strong market, we predict that many records will be set.

The Baltimore ANA contains rarities from 400 consignors, but I must call special attention to the magnificent gold in Part Five of the Stephen Stokely Collection (his $20 Saint-Gaudens Registry Collection) and the Pierson MacDonald Grieve Collection, the Large Cents of the Joshua Collection;