Collectors who enjoy planetary themed proof coins may get another chance at adding ten more to their collection beginning in 2011. A new...
Read more
Coin & Numismatic News 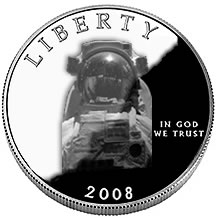 The Senate unanimously passed the act on Thursday, June 19, which follows unanimous passage by the House for the same named bill on July 30, 2007.

The legislation authorizes the United States Mint to issue:

The NASA commemoratives would be minted in "proof quality only." The proposed nine various designs for the silver coins add an extra level of intrigue to these commemoratives that is sure to peak interest.

It was introduced only last month but The NASA 50th Anniversary Commemorative Coin Act passed the House and is now in the Senate's...
Read more