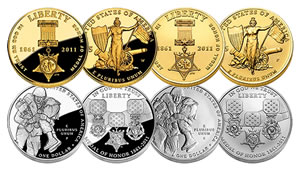 The United States Mint on Monday at 5:00 PM ET will discontinue the introductory prices for the 2011 Medal of Honor Commemorative Coins.

Each of the commemoratives will have their prices raised by $5, an amount and percent increase much more noticeable on the silver dollars than on the more expensive $5 gold pieces. However, sales in the past typically are not significantly hurt following a transition to [...]

The United States Mint released the opening sales figures for the recently issued 2011 Medal of Honor Commemorative Coins which celebrate and recognize the Medal of Honor's establishment in 1861.

Buyers handed out more money for the silver dollars than the $5 gold coins, as was the case with the first round of commemoratives issued this year which honor the founding and history of the [...] 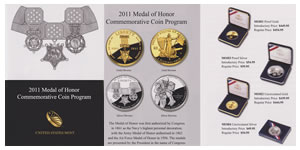 They are available in collector proof and uncirculated qualities at introductory prices ranging from $49.95 to $449.95. The issues are the final series of commemorative coins to be released in 2011 [...]

US Mint Images for 2011 Medal of Honor Coins Released

The Mint has included images of both coins produced as part of the Medal of Honor Commemorative Coin Program -- the $5 Gold Coin and the Silver Dollar, with both the proof and uncirculated versions of each [...]

In 2011, the United States Mint has been authorized by Public Law 111-91 to issue commemorative silver and gold coins to celebrate the 150th anniversary of the Medal of Honor.

The Medal of Honor for individual valor was proposed by Iowa Senator James W. Grimes in 1861 and signed into law by President Abraham Lincoln on December 21, 1861. [...]

Medal of Honor Commemorative Coins in 2011

The collector minted proof and uncirculated coins will mark the 150th anniversary of the establishment of the Medal of Honor in 1861, America's highest award for valor which can be bestowed upon an individual serving in the Armed Services of the United States.

"We owe everything to those who wore the uniform and committed extraordinary acts of bravery in defense of their colleagues and nation," said Rep. Christopher Carney who introduced the legislation which easily passed in the House and then the Senate.

Legislation seeking to recognize and celebrate the establishment of the Medal of Honor was approved in the U.S Senate Thursday by Unanimous Consent. The...
Read more
Coin & Numismatic News

Knocking on the legislative door for the eighth consecutive year is a new bill seeking to treat coins or bars composed of silver,...
Read more
Coin & Numismatic News

US gold and silver coins would be struck in recognition and in celebration of the Medal of Honor and its establishment...
Read more