A Hoard Comprising Hundreds of Gold Coins was Uncovered in the Excavations the Israel Antiquities Authority is Conducting at the 'Giv'ati Car Park' in the City of David, in the Walls Around Jerusalem National Park. 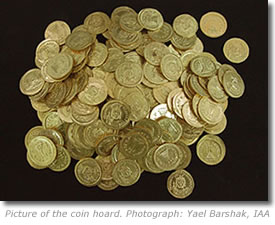 One thousand three hundred year old Chanukah money in Jerusalem: a hoard of more than 250 gold coins was exposed Sunday in the excavations the Israel Antiquities Authority is conducting in the Giv 'ati car park in the City of David, in the Walls Around Jerusalem National Park.

The excavations at the site are being carried out on behalf of the Israel Antiquities Authority, in cooperation with the Nature and Parks Authority and are underwritten by the 'Ir David Foundation.

Since the archaeological excavations began there about two years ago, they have not ceased in providing us with surprising discoveries that shed new light on different chapters of the city's past. Currently a very large and impressive building is being uncovered that dates to about the seventh century CE (end of the Byzantine period-beginning of the Umayyad period). A large cache of 264 coins, all made of gold, was discovered among the ruins of the building.

A silver coin that was used to pay the half shekel head-tax to the Temple was found in the main drainage channel of Jerusalem...
Read more