Girl Scout Commemorative Silver Dollars are in the works. Legislation to celebrate the Girl Scouts with silver coins passed in the U.S. House of...
Read more
Coin & Numismatic News 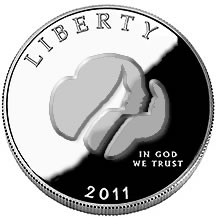 The Girl Scouts USA Centennial Commemorative Coin Act, or H.R. 621, was introduced on Jan. 21 by Rep. Jack Kingston. It represents a second attempt at passage as the first version failed to make its way through last year's 110th Congress.

New legislation seeking to commemorate the Girl Scouts 100th anniversary with up to 350,000 silver dollars in 2011 was reintroduced in the U.S. House of Representatives on Wednesday, January 21.

The Girl Scouts USA Centennial Commemorative Coin Act was brought back under a new bill number (H.R. 621) by Rep. Jack Kingston after the first version failed to make its way through the 110th Congress.

The Boy Scouts Centennial Commemorative Coin Act was signed into law in October of 2008, making it more likely the Girl Scouts legislation would pass as well. However, the Boy Scouts celebrate their centennial a year earlier and required quicker consideration. And the busy 2008 fall political season was less than conducive in getting many bills mustered through for passage. The new 111th Congress will now have the opportunity to help celebrate the history of the Girl Scouts. Read the rest of this numismatic news article »