US Quarter Dollar to be Replaced by National Park Quarters 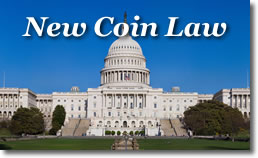 The law mandates that each quarter will be "emblematic of a national park or other national site in each State, the District of Columbia, and each territory of the United States."

The Treasury Secretary will select the final list for respective quarter designs within 270 days and after consulting with the Secretary of the Interior and the governor or other chief executive of each State. The quarter series will last for at least 11 years, but an optional provision provides the Treasury Secretary the authority to extend the series past 2030.

A bill recently introduced by Rep. Melvin Watt [D-NC] proposes a 40-coin, eight-year series of circulating quarters to commemorate and be emblematic of "prominent civil rights leaders and important events that have advanced civil rights in America."

H.R. 6701, "Civil Rights Quarter Dollar Coin Act of 2008," was introduced July 31, and has an already large cosponsor list of 99 representatives.

Most collectors are now familiar with the H.R. 6184, "America's Beautiful National Parks Quarter Dollar Coin Act of 2008," which the House passed July 9 and would continue circulating quarters commemorating national parks and sites for at least 11 years. Like it, H.R. 6701 would authorize a large silver version of the coin measuring 3 inches in diameter and weighting a 5 ounces. 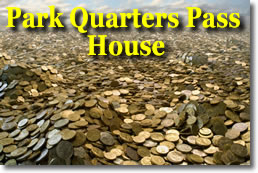 H.R. 6184 would authorize the United States Mint to make changes to the design of the quarter-dollar coin to feature one national park or other national site in each state, the District of Columbia, and each territory beginning in 2010.

During this period, designs for each national park or other national site would replace the eagle design on the reverse side of the George Washington quarter that is scheduled to be used again in 2010 (after the conclusion of the D.C. and U.S. Territories Quarter Program).

With a rate of issuance set to five quarter-dollars each year, and a clause granting the Treasury Secretary — the ultimate authority over the United States Mint — the discretion to mint a "second round," the American public may see rotating quarter designs for 20 years, or until almost 2030.

The call for national park quarters grew louder with progress in the House and introduction in the Senate. The joint quarter-dollar legislation seeks to:   ...
Read more
Coin & Numismatic News

Coin legislation was introduced in the U.S. House of Representatives last week calling for the creation of another multi-year quarter series. The America's Beautiful...
Read more
Coin & Numismatic News

If you enjoy changing quarter designs, you may be happy for many more years. Legislation was introduced in the House Wednesday calling for a...
Read more