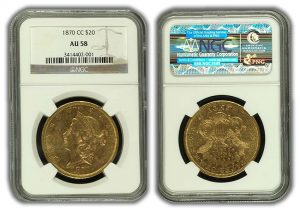 "When we opened the Brinks bag, it was evident that the shipping box had been sliced open, and the PCGS box within was empty," said Paul Minshull COO of Heritage. "We immediately called PCGS, who confirmed that their security surveillance video showed that the box and package with the coin were shipped as usual and in good order. At that point, we contacted Brinks security and our insurance company, and their investigations have started. We have also reached out to the FBI."

The 1870-CC $20 rarity was only recently discovered and sent to Heritage for auction [...]

The price realized, which includes the 15% Buyer's Fee, is the most ever paid at auction for a Roman silver coin.

The Sept. 7 session of Ancient Greek, Roman and Byzantine coins was part of a four-day series of auctions at Heritage, featuring the Rubicon Collection of Roman coins and the [...] 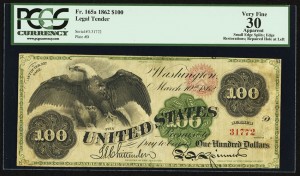 The auction began with a large selection of World Notes representing 94 countries. The Chinese and Cuban notes, in particular, brought strong prices.

Led by the $6.8 million Norman Jacobs Collection, featuring an absolutely stellar 1909 set of Korean gold coins that realized a total $1,391,500, Heritage Auctions' Sept. 8-9 Signature® World and Ancient Coins Auction at the Long Beach Coin, Stamps & Collectibles Expo realized more than $20.5 million, a record total for a single auction since the category's inception at Heritage 11 years ago.

More than 3,580 bidders vied for the 2,835 lots in the auction, translating into an astounding 98% sell-through rate by total lot value. All prices quoted include 15% Buyer's Premium. The auction represented the largest multi-consignor world coin auction ever presented in the United States, and saw super high grade coins -- especially those with a grade of MS-65 and above -- bringing premiums never before seen in the market, akin to those that are usually associated with high grade U.S. coins [...] 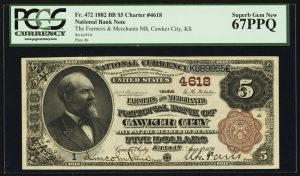 Heritage Auctions, the official auctioneer of the September Long Beach Coin and Currency Exposition, will be presenting more than 5,600 lots of rare and collectible currency as part of its Signature® Currency Auction, Sept. 7-9 and Sept. 11-12.

The lots will be offered in four floor sessions at the Long Beach Exposition and two additional sessions presented online.

Session One kicks off on Wednesday, Sept. 7, at 6 p.m. PT with World Bank Notes, followed by selections of Colonial Currency, Canadian Currency, Fractional Currency, notes of the Confederacy and Obsolete Currency [...]

A unique 1855-S $3 gold PR64 Cameo NGC, CAC, Ex: Golden Gate Collection, a supreme rarity in the world of numismatics, brought $1,322,500 -- along with applause in the auction room -- as the top lot of Heritage Auctions' Aug. 11-12 Signature® U.S. Coin & Platinum Night Auction at the Marriott-Chicago O'Hare (all prices include 15% Buyer's Premium).

The legendary 1910 Chinese Dragon Dollar, called the Yunnan Spring Dollar in reference to the four Chinese characters that translate to "Spring 1910" on its reverse, could bring in excess of $1,000,000 as part of Heritage Auctions Sept. 8-9 Long Beach Signature® World & Ancient Coins Auction, at the Long Beach Convention Center.

"This enigmatic issue is one of China's rarest coins, with only two genuine pieces known," said Warren Tucker, Vice President of World Coins at Heritage. "It's been a coin of mystery and legend since its discovery around 1920. Despite near constant research in Chinese numismatics, time has yielded no definite reason or meaning for the term 'Spring 1910.'"

The first genuine example of this issue to appear at public auction was sold in Beijing, in April 2002, at [...]

"The front cover of our Platinum Night catalog, our collection of the 'best of the best' in this auction, has three key coins on it," said Greg Rohan, President of Heritage. "One is a great early pattern, and two are rare proof coins in gold. Of course, there are many more highlights than just those, but the three coins really stood out and captured the overall strength of the event." [...]

"Less than 10 of these great rarities are known to exist," said Greg Rohan, President of Heritage. "When one comes on the market it constitutes a real numismatic event and we expect collectors will respond accordingly when it comes time to bid."

The 1792 pattern cents, Birch cent, half disme, disme and quarter were the prototypes for [...]