The year was 1066 and a pivotal battle between two European powers that would help shape the history of the continent, and for that matter the world, was about to take place near a coastal village in England. To commemorate this conflict, the Perth Mint is now offering The Battle of Hastings 1066 1oz Silver Proof Coin as the third coin in its successful Famous Battle coin series. 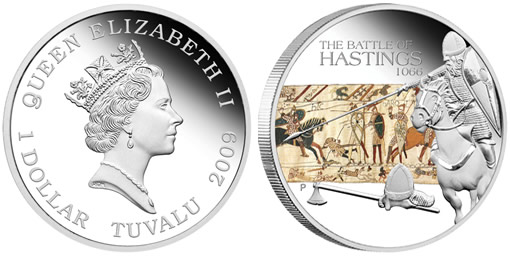 Harold II, King of England, had just returned from crushing a Norwegian Viking invasion when he heard news of a Norman force near the village of Hastings. Eager to show his people of his ability to protect them under all circumstances, he rushed with what men he could find to meet the threat. Advisors had pleaded with King Harold to delay in order to give his battle weary soldiers a rest and to muster additional troops. Harold refused and marched at once with a force estimated at 7,500.

Battle of Cannae 216 BC Silver Coin from Australian Perth Mint

Offering the second coin in their Famous Battles series, The Perth Mint of Australia on Friday introduced the Battle of Cannae 216 BC 1...
Read more