Tags Crowns of the House of Habsburg

Tag: Crowns of the House of Habsburg

The second 100 Euro coin in the gold series "Crowns of the House of Habsburg" will be released on Wednesday, 4th November. It is dedicated to the so-called "Archduke's Hat", a name derived from the red velvet cap within the crown itself.

The title of archduke was invented by Rudolf IV in the spurious document of 1358/59 called the privilegium maius. It was an attempt to assert the status of the House of Habsburg as the equal of any Prince Elector of the Holy Roman Empire. There exists a mediaeval portrait of Rudolf wearing a crown similar to the Archduke's Hat. Early versions of the crown have not survived, being either broken up or melted down.

In 1616, however, Archduke Maximilian III of Tyrol had the present Archduke's Hat fashioned and he gave it to the Augustinian Abbey of Klosterneuburg just outside Vienna in honour of St. Leopold, whose tomb and shrine are still situated there to this day. The crown was not worn as such. There was no coronation. It was rather a symbol of authority and rank. It was brought into Vienna only for the ceremony of homage paid by the Estates of Lower Austria on the accession of a new Habsburg ruler. Even today the crown is not permitted to be outside the walls of the abbey for more than 30 days at a time.

On 5th November, 2008, the Austrian Mint in Vienna launched its new gold commemorative series “Crowns of the House of Habsburg.”  The five coin series begins this year with the 1,000 year old crown of the Holy Roman Empire. 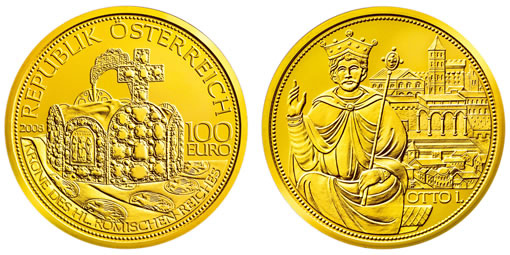 When the empire of the Caesars in the west sunk beneath the waves of barbarian invasions, it left a ghostly memory of unity and peace among the peoples of Europe and even among the rulers who had replaced it. On Christmas Day in the year 800 Pope Leo III, seeking a powerful protector from his enemies, crowned the Frankish king Charlemagne in St. Peter's in Rome, thus reviving the imperial title that had vanished three centuries before..