Five people were arrested in Southern California earlier this week for allegedly counterfeiting between $5 and $6 million in phony $20s and $100s over...
Read more
Banknotes or Currency Articles 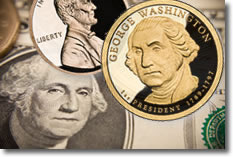 A new poll by Harris Interactive® reflects American's favor for the Lincoln penny, its preference for the $1 bill and the uphill battle the U.S. Mint is fighting to get new Presidential $1 coins into daily circulation.

A new bill was introduced yesterday that proposes the elimination of the Canadian penny. Abolishing a country's smallest denominated coin is not new....
Read more
Banknotes or Currency Articles

The newly redesigned $5 bill entered circulation March 13, 2008. While it will take time for everyone to receive their first $5, those that...
Read more
Banknotes or Currency Articles

Pizza Shop Owner Made Fake Dough in Batches of $50 Counterfeits

Making dough is common place in a pizza shop kitchen. Making fake dough, as in counterfeited $50 bills, is not so common. Police arrested...
Read more
Bureau of Engraving and Printing (BEP)

While Congressman Ron Paul is running for President, he is also attempting to create new law. On February 13, 2008, Mr. Paul...
Read more