One US Mint gold coin sold out this week compared to the eight gold and platinum collector options that disappeared from Mint store shelves...
Read more
Coin & Numismatic News 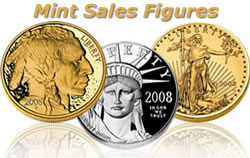 Collector gold and platinum coin sales have been ablaze with eight sold out options since last week's U.S. Mint sales figures were released.

The final two one-ounce and one-half ounce uncirculated gold Buffalo coins departed over the weekend, and the last one-half ounce proof Buffalo went Monday afternoon with a surging 58.5 percent increase in sales over the previous week.

In addition, the proof American Eagle platinum one ounce, one-half ounce and one-quarter ounce options sold out Tuesday morning, the one-tenth ounce on Wednesday, and the four-coin set just this morning.

Six Gold and Platinum U.S. Mint Coins have Sold Out within Four Days

The pace at which gold and platinum collector coins have disappeared from U.S. Mint store shelves is blistering. The final two uncirculated gold Buffalo coins sold out over the weekend, the last proof Buffalo went Monday afternoon, and the proof American Eagle platinum one ounce, one-half ounce and one-quarter ounce options sold out this morning.

Further, the Eagle platinum proof one-tenth ounce and four-coin set may be joining the "sold out" ranks since their shipping dates have been delayed. In past weeks, that has been a strong indicator of a quickly depleting inventory. It appears the proof and uncirculated American Eagle gold coins will soon be the sole remaining collector options available.

With all these latest sell outs, it is worth remembering the collector gold and platinum coins the U.S. Mint announced it will no longer produce in 2009:

All 2008-W American Eagle Platinum Uncirculated coins have been sold, according to the United States Mint online store.

The one ounce version was the final size remaining after the 1/2, 1/4, 1/10 and 4-coin set sold out earlier -- the 1/2 ounce platinum just last week. The one ounce moved to the "product is not available" category Wednesday morning.

Collectors have watched the series closely since the Mint reduced its coin prices on November 13 and also announced the elimination of several hundred coins from its 2009 numismatic portfolio, including all options of the American Eagle Platinum Uncirculated Coins.

High demand has depleted all but the American Eagle Gold and Silver one-ounce coins from its 2008-dated bullion coin inventory, the United States...
Read more
123Page 1 of 3