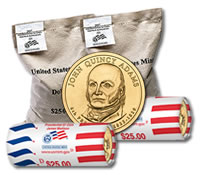 The United States Mint has updated Presidential $1 coin production figures through to the 24th Presidential dollar honoring Grover Cleveland’s second term. The next update will include amounts for William McKinley Presidential $1 Coins. Those should be available around March-April 2013.

The U.S. Mint Presidential Dollars series began in 2007 with a mintage of over 340 million coins honoring George Washington. Successive releases by President have resulted in a trend of fewer $1 coins minted for circulation.

2010 production went through a very noticeable decline, although the popularity of the Abraham Lincoln dollar caused a spike for that particular coin. The first 2011 release honoring Andrew Johnson was the lowest of the year and the series to that date. Then 2012 came and mintages plummeted after the U.S. Treasury Secretary halted $1 coin production for circulation, stating enough had already been stored in vaults to last 10 years. Since then, the dollars have only been produced for coin collectors.

As the following table of coin production figures show, the U.S. Mint has minted more than 2.42 billion Presidential $1 Coins from 2007 to 2012.

In August 2008, the U.S. Mint started a coin campaign to promote dollar coins for use in everyday transactions. It had very limited success.

The U.S. Mint also kicked off a Direct Ship program in June of 2008 to place $1 Presidential coins directly into the hands of retailers, financial institutions, or anyone interested in buying dollar coins — all at face value and without shipping charges.

Today, the U.S. Mint continues to strike dollars in circulating-quality but only in amounts needed by collectors. The Mint offers every new dollar released 25-coin rolls, 100-coin bags, 250-coin boxes and 500-coin boxes.