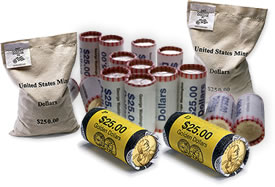 An amazing number of coins are produced from U.S. government presses each year. The United States Mint is responsible for all American coin production — both collector and circulating coins.

The US Mint is over 200 years old. Since its creation on April 2, 1792, it has grown to become a Fortune 500- sized manufacturing enterprise with more than $1 billion annual revenues and 2,200 employees. The US Mint is the world’s largest manufacturer of coins, medals and numismatic products.

US Mint facilities in Denver and Philadelphia are responsible for producing circulating coins used in every day pocket change to buy and sell goods. The following circulating coin production tables provide data on the amount of coins produced each year.

US Mint Facilities that Produce Coins

The United States Mint has six major facilities/locations. Not all of them produce coins for circulation. Some are responsible for producing collector coins and other duties. The US Mint has provided the following general activities and responsibilities for each:

Philadelphia was the first mint in the U.S., and delivered the first copper cents in March of 1793. Today the facility is responsible for sculpting-engraving U.S. coins and medals, producing medal and coin dies, the production of coins of all denominations for general circulation, producing the Philadelphia “P” portion of the annual uncirculated coin sets, and commemorative coins. It also provides tours at:

The United States Mint at Denver was established in 1863. Denver produces all denominations of circulating coins, coin dies, commemorative coins and the Denver “D” portion of the annual uncirculated coin sets. It also stores gold and silver bullion. Tours of the facility are provided at:

The West Point facility is located near the U.S. Military Academy in the state of New York. It produces all uncirculated and proof one-ounce silver bullion coins. It also manufactures proof and uncirculated American Eagle silver, gold and platinum coins, the 24-karat one ounce American Buffalo Gold Bullion Coin, and commemorative coins. In addition, it stores silver, gold, and platinum bullion.

In 1854, the San Francisco Mint opened its doors and began converting miners’ gold into coins, producing $4,084,207 in gold pieces by December of that first year alone. The San Francisco facility does not currently produce circulating coins, but it does produce regular proof coin sets in clad and silver as well as commemorative coins.

The Mint’s Washington, D.C. location formulates policy, heads program management, is responsible for research and development, handles marketing operations and customer services to include order processing and website services. It is located at: