Precious metals advanced for a second day in a row on Friday, but they divided on the week. Gold and silver eked out another weekly win — their second straight, while platinum and palladium finished lower than week ago. Platinum’s weekly loss was its third in four weeks. Palladium, meanwhile, extended its weekly losing streak to four in a row.

"Anyone trying to convince market participants that inflation is not here, that’s a fool’s game," and with soaring energy prices due to a crunch in China and Europe likely to hit growth and earnings, that will leave us with a volatile October and, in turn, support gold, Saxo Bank analyst Ole Hansen said according to Reuters.

Gold futures picked up 0.4% this week after edging 30 cents higher last week. They bounced 2% on Thursday, but still marked September and third quarter losses of 3.4% and 0.8%. On Wednesday, gold futures ended at their lowest price since March 31. Gold prices are 7.2% lower on the year to date.

In other precious metal futures on Friday and for the week:

Both are lower on the year so far with losses of 9.8% for platinum and 22.4% for palladium.

*Note, this post has nothing to do precious metals* Hi All, I came to this site several months ago. At first, I really enjoyed all of your posts and even commented on some. But then midway, people’s posts started getting weird (IMHO) – numerous “Debbie Downer” posts about the US Mint accepting our orders when they clearly knew they were already sold out (ASE W Unc) how we would never receive our coins because we bought them past a certain time (ASE RP), etc. Now, the posts are simply no more fun to read. They seem to have little to… Read more »

Hear ! Hear ! Scarecrow !!!! Some people have nothing better to do in life but whine all the time. Debbie Downers !!!! and lots of whining as I say it “Old Ladies” !!!! LOL

This could not be a more perfect set of comments from the Scarecrow and Sam Tweedy bird! Hahaha let’s just keep segregating everyone. Masks here, no masks there, whites down here, birds up there, regular folk to the left, and smart people to the right. Woot woot.

The best question of all, if your here for coins, why do you let the comments bother you?? The articles are great and insightful everytime by the coin news staff.

Mine is still down as well. Could it have something to do with the Morgan and Peace Dollar orders?

Very good question KW. and that is not fake news.

Kaiser, the proper acronym is YCMTSU.
You
Can’t
Make
This
S___
Up

American Innovation 2022 line-up – have to say I like them all. 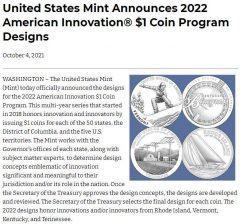