The United States is still storing an extraordinary amount of $1 coins, according to Federal Reserve data updated mid-August. The data shows Reserve Bank inventories of dollars at 1.011 billion coins through the second quarter of 2021.

Demand for dollar coins hasn’t been robust, obviously, although it does change a bit year to year. Since peaking they have trended lower by about 4 million coins per month, indicating that there are enough dollars stored away to last more than two decades.

Most of the dollars held in vaults are Presidential $1 coins. As directed by Public Law 109-145, the United States Mint beginning in 2007 produced them in commemoration of former American presidents.

The public prefers paper money over clad dollars, and inventories of $1 coins ramped up by as much as 298 million a year. The trajectory had Fed officials talking about adding storage facilities.

The build-up was eventually checked after Treasury Secretary Timothy F. Geithner halted $1 coin production for commerce in December 2011 when the stockpile had reached 1.42 billion coins.

Today, the United States Mint continues to manufacture clad $1 coins but only for collectible products that are sold to the public. These include one a year bearing a design honoring the important contributions made by Indian tribes and individual Native Americans and four a year featuring designs celebrating American innovation.

As a comparison to the most Fed ordered U.S. denomination for circulation, the U.S Mint produced over 3.7 billion cents in the first half of this year alone.

So no one has any thoughts or suggestions as to why Alison Doone is the NEW USMINT DIRECTOR as of October 1st? David I says he’s exploring new opportunities.

If those new opportunities include guest host on the coin shows maybe he will use The Rolling Stones Sympathy for the Devil as intro music. I personally wish Mr Ryder well in his Pursuit of Happiness.

Maybe his exit package is all the 2024 cents that the US Mint will mint.

I’m not going to hold my breath, concerning your faith in one A.D., that anything is going to change at the Mint.

Maybe stop minting these $ coins that they won’t put into circulation and nobody wants or have every heard of would be an INNOVATION idea to grab a hold of for the USM. Maybe the mint’s IT department can figure this out. After all, they have done such a bang up job withe web site ordering process!!

It’s all the George Washington coins from the first presidential release HSN’s Caffeine Mike returned all of his unsold gold (not really gold) gold dollar coins. 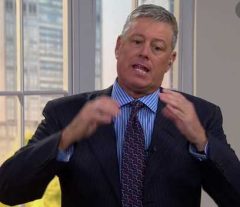 Kaiser, Mike ‘don’t you wish you had my library’ Mezack was selling the 2021 W Unc ASE’s ( of course in perfect SP70 grade) for $279.95. This coin, although he said is the rarest of all the ASE’s the mint sells, took only 6 minutes to sell out. For a Type 2 ASE that is the rarest of the rare it sure took a long time to sell out from the Mint. He only had 300 ‘First Day of Issue’ SP70’s and, of course, they sold out. Oh, I almost forgot, yes it does come with the lovely RED OAK… Read more »

Mike Mezack is explaining how the Type 2 ASE Eagle can fly with that turkey leg for a wing, crashing into the swamp. Does he have a “DEAL” for “YOU!!!!!

Do ya think Mikey can find a silver spoon to eat it with.

They need to 1. STOP production of any US dollar coins …..nobody uses them and a COMPLETE waste of money and manpower. . Only mint mint the dollar as the next presidents pass away. 2. Decide what to do about the lowly cent that costs more to make than face value. Most people i know don’t carry money around anymore…its all about using plastic and contact-less payments… its a fact. 3. Half Dollars…..why…just because its Kennedy? In my opinion all the current faces on our coinage are way past their prime. This is why collectors LOVE stuff like the new… Read more »

Id be happy with a CHANGE…..anything! I just happen to love the Morgan and Peace dollar designs. Great presidents ….ok….so no one else is…., be it president or civilian..is .worthy….sad after 236 years. Oh and whomever decided to put dates and mint marks on the edge of any coin is an idiot…..not a collectors friend.

God’s honest truth…I haven’t used a single physical coin to pay for anything this year, and don’t plan on using a single coin. It’s all plastic or electronic nowadays.

I once got a 1909 vdp in change at a Walmart, knew immediately that the lady had just opened a roll of plenty old wheats, asked her if I could buy the roll, she obliged, and what a treat. Thats my only amazing coin find story.

I think that in my life time, coins will actually disappear, I think that plastic and electronic funding is the future.

I found CCTV security camera footage of Ryder at the office.

I say let’s release all 1.011 billion of these $1 coins into circulation and call them ‘Biden Quarters,’ in honor of the massive inflation we are experiencing during his tenure.

…after all – doesn’t ‘The Buck Stops Here’ apply to the President’s desk?

Kaiser, I agree with most of your post, but question your statement as to what segment of our demographics the two parties cater to, or represent. You obviously don’t watch any business shows, because if you did, you’d know Wall Street almost ubiquitously supports democrats, not republicans.Oh yeah, Zuckerturd, Dimond, Dorsey, Iger, et al., all were fully endorsing Trump. Right! As a so called ‘arm chair historian’, you’re becoming a bit rusty. Next you’re going to tell me it’s the republicans who are the racists! But I will state I do think both parties have become worthless, as to the… Read more »

See, and I want to use dollar coins but my bank won’t order them in order to “keep inventory low” and before my bank was bought out by the owner which now currently won’t order them, they were the last bank in my area that would get me those coins The Mint doesn’t do that dollar coin program anymore where they’d send you a $250 box of them at face value with free shipping They say “the public prefers using dollar bills” but the fact is those of us who would prefer to use dollar coins can’t get them even… Read more »