The proof American Gold Eagle is restricted to just 1,945 units. The corresponding proof American Silver Eagle, meanwhile, is capped at a mintage of 75,000.

The coins carry the same obverse (heads side) and reverse (tails side) designs as their traditional counterparts. For the Gold Eagle, this includes Augustus Saint-Gaudens’ full-length figure of Liberty on the obverse and Miley Busiek’s depiction of a family of eagles on the reverse. On the Silver Eagle, we find Adolph A. Weinman’s "Walking Liberty" on the obverse and John Mercanti’s heraldic eagle with shield design on the reverse.

"The design outline of the privy mark represents the aerial view shape of the Rainbow Pool located at West Potomac Park in Washington, D.C., which is now an integral part of the World War II Memorial," the U.S. Mint describes.

Both coins were struck at the U.S. Mint’s facility in West Point.

Upon their release, the 2020-W End of World War II 75th Anniversary American Eagle Coins may be ordered directly from the Mint’s online catalog for American Eagle products.

The proof Gold Eagle is $2,600 and the proof Silver Eagle is $83.00. In addition to their mintage limits, each has a household order limit of one coin.

Update (Nov. 5 at 12:30 pm EST): The U.S. Mint sent numismatic news editors the following message about ordering: "The United States Mint is aware of website issues impacting customers’ ability to purchase Mint products. We are working to correct the problem. Thank you for your patience."

"The 2020 End of WWII 75th Anniversary American Eagle One Ounce Gold Proof Coin and the End of World War II 75th Anniversary American Eagle Silver Proof Coin were released for sale at noon ET on November 5. Release of these coins resulted in the highest website traffic we have ever experienced, which greatly exceeded our expected capacity.  This high volume caused website instability, and customers encountered error messages and in some cases were unable to purchase their desired product.  Due to extremely high demand, the American Eagle Gold Proof Coin became unavailable by 12:07 p.m.  We are pleased with the initial demand, but are also in the process of evaluating the various customer concerns and system constraints and/or failures we experienced.

We want to assure you that the United States Mint remains committed to providing the highest possible level of customer service, and regret any inconvenience or frustration this buying experience caused."

i received a text that the silver AE proof was going back on sale at 12 today, as others have (judging by the site crashing again). It shows it not available at 12:01. 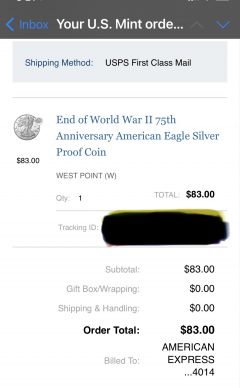 no thats USM confirmation – being shipped !

I would like to know why the mint sold so many coins to people on eBay and yes prices were 400 to 1000 each. It’s bad enough to deal with the virus but when you get screwed over by the US Mint, it makes me want to give up coin collecting !!!!!

Lol. It will be the U.S. Mint “roulette wheel” gambling/sweepstakes website ordering debacle once again!
The U.S. Mint’s new motto is, “Just try to purchase one of our limited edition coins/medals & experience the excitement & fun of the 5th level of HELL!”

Hell might not freeze over but the U S MINT will surely make it seem that way for all of us REAL coin collectors!!! Lol

Sam — You won’t be getting any “competition” from me regarding Medals. I decided long ago that I only want items from the Mint that are real coinage. Medals don’t do it for me. I wish you the best if you decide to go after them. — MH

All those lucky enough to get their order on the gold v75 Privy should feel lucky indeed. People selling the coin ungraded on eBay are doing the correct thing too. Don’t bother to send to PCGS or NGC the Proof 70 grades are reserved for the coin dealers that support the grading companies. The dealers were really pissed that the Mint cut them out of this deal. Even though a lot of collectors miss out on these coins, at least more individuals got the coins than dealers. But the dealers and grading companies know the game and this will probably… Read more »

I see people on eBay selling these coins in unopened USM packaging. That seems a little risky to me. The seller can’t 100% verify what’s in the packaging or the condition. And it seems like a dishonest buyer could claim that they did not receive the stated item or condition. Maybe I’m just a pessimist.

I know there is lots of angst on this thread – but I am absolutely LOVIN’ my silver V75 Eagle…! It is beautiful for sure.
i wanted both the gold and the silver but only got the silver.