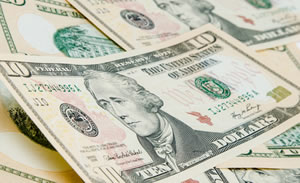 U.S. paper money production slowed to a four-month low in June, according to data published Aug. 8 by the agency responsible for printing American currency.

The Bureau of Engraving and Printing (BEP) produced 547.52 million banknotes in June for a combined value of more than $13.2 billion. By comparison, May levels registered at 634.56 million notes, the most since October, worth over $18.1 billion.

In percentage breakdowns, June saw 13.7% fewer notes than May for a 27% lower combined value. In other month-over-month comparisons, there were:

The number of $10s matched in both months. The BEP did not make $50s for a fifth month in a row after six straight months of pressing them. Also, $2s have not been printed since July, and more are not expected for some time. The Federal Reserve noted that their FY 2016 order for $2s was enough to meet demand for "multiple years."

The BEP produced 320,000 $20 star notes. Star notes are replacements for misprinted or damaged notes and for certain serial numbers like 000 000 000. They have serial numbers that end with a star "*" designation, and are also so indicated by quantities in the images above. Money collectors usually find star notes more desirable since they are harder to find.