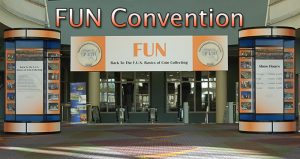 The Bureau of Engraving and Printing (BEP) and United States Mint will be at the upcoming Florida United Numismatists (FUN) Convention, the two government agencies announced in a joint news release.

The 61st annual FUN show opens from January 7 to 10, 2016 at the Tampa Convention Center, Florida. According to FUN, it will:

Look for the BEP and the U.S. Mint at booth #1801. New 2016-dated products for sale include the Mint’s 2016 Birth Set and 2016 Happy Birthday Set and the BEP’s 2016 Life Intaglio Print from its Independence Collection.

The BEP will display its Billion Dollar Exhibit. It features more than $1 billion worth of rare currency, including sheets of $100,000 currency notes, Treasury Bonds, and Gold and Silver Certificates.

Admission to the FUN show is free to the public but attendees must visit the registration booths and pick up a "HELLO" badge before entering the bourse floor.

The show opens to the public Thursday through Sunday, at 10AM. It closes Thursday and Friday at 6:30PM, Saturday at 5:30PM, and Sunday at 3:00PM.