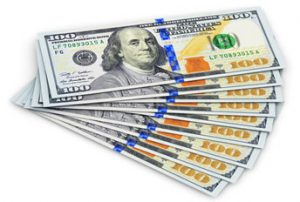 Fewer bills were pressed by the U.S. government in February than a month earlier and the combined value of the money was down as well, data from the agency responsible for printing American currency shows.

This up and then down monthly pattern has repeated since September.

In month-over-month comparisons, the quantity of banknotes declined 20.7% and the total dollar value dropped 26.2%. The type of banknotes printed almost matched those from January, the exception being a lack of $5’s in February. More $10s were printed last month but all the other denominations fell sharply from between 27% to 37%.

Last month the BEP produced more than 7 million star notes across $1s, $5s and $100s. These are indicated by the "*" designator in the above money production chart. Star notes are replacements for misprinted notes or certain serial numbers, like 000 000 000. Money collectors find them more desirable since they are more difficult to find.

The following table lists the type, the amount and the total value of notes printed by the BEP in February: