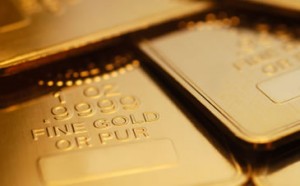 Gold for April delivery rose $3.80, or 0.3%, to close at $1,331.80 an ounce on the Comex division of the New York Mercantile Exchange. Gains came on safe-haven concerns over the crisis in Ukraine and following remarks from Federal Reserve Chair Janet Yellen, opined analysts.

"There is some safe-haven buying," Frank Lesh, a trader at FuturePath Trading LLC in Chicago, said in a telephone interview according to Bloomberg. "The Fed clearly seems concerned about the economic conditions."

Yellen on Thursday said the following, in part, to the Senate Banking Committee.

"A number of data releases have pointed to softer spending, and part of that softness may reflect adverse weather conditions. It’s difficult to discern how much."

U.S. Mint gold coin sales rose for the first time since Friday, gaining a total of 3,000 ounces. The bureau’s silver coins have been silent since Tuesday but gains on the week are already the strongest since the debut week of the newly dated 2014 American Silver Eagles.

Below is a current sales breakdown across all the Mint’s bullion products.