This fourth article in a series about our visit to the U.S. Mint at Philadelphia offers information and more than 30 photos on hub and die making.

My brother and I were treated to a special tour of the operations at the United States Mint facility in Philadelphia. We had planned this trip for some time so I had many preconceived ideas of what would be most exciting. 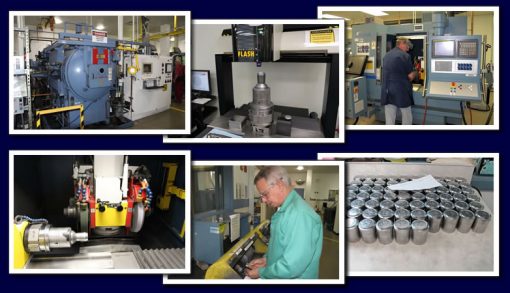 I’ll be the first to admit, the procedures related to hub and die making were not high on my list. Our father was a tool-maker so I expected this process would be familiar and, as such, not heart-pounding.

Much to my surprise, I was completely enthralled. It was not the mechanics of it all that was most inspiring. It was the people. Sure, the equipment is impressive. Yet more striking, those in the hub and die making area projected great pride in their work and that really forged a lasting memory for me. Actually, we found high levels of pride and dedication all around the place. But as I had not expected too much from this particular section, their drive turned it into a great time for me.

Before getting further, the photo directly below offers a visual aid to the major hub and die making stages, and what this article is about. We made the image a little bigger than usual, so just click on it to see more details.

For those that do not know, coin hubs and dies are formed pieces of metal with designs on one end. You could think of them as a rubber stamp since the design on a die or stamp is used to create multiple copies of the same image.

An article previous to this one describes the first step of coin production, the designing and sculpting stage. At the U.S. Mint facility in Philadelphia, those artistic representations are digitized in 3D and sent to a CNC (computer numeric control) milling machine which replicates the design on the end of a piece of steel. That piece is called a master hub. It’s the first generation of the hub and die process.

This master hub is then put into a hydraulic press to force it against another piece of steel. This second piece, which now contains the reverse or negative image of the design, is called a master die. It’s the second generation of the process.

Master dies are then also placed in hydraulic presses and forced against yet more pieces of steel. These third generation pieces are called working hubs which are fed into presses once again to create batches of working dies. It is these working dies that are used in presses to manufacture coins. By utilizing several generations of hubs and dies, the designs remain true to original.

Of course, there are more steps in the process, but for that we have pictures!

Everything starts from steel. Bars of the metal arrive at the Philadelphia Mint in 10-12 foot lengths, which are then cut into 42-inch lengths and stored until needed.

Eventually, it needs to be cut further. Bar stock is loaded into an automated CNC twin spindle turning center, shown below, which does the cutting work. The first spindle and turret chamfers the back end and makes the 3-inch length. The second spindle and turret creates a cone shape on the end, making it a "die blank." This is done to exacting specifications so the steel will flow easily and fill when pressed during the hubbing process.

The coned angle of the finished die blank is polished to a mirror-like finish and stored for the next hub or die making stage.

A Mikron CNC milling machine, shown below, is used to cut hubs and dies. If it looks familiar, that’s because it’s the same machine that is used to create Resin templates for U.S. Mint artists who sculpt in clay. It generally takes 15-20 hours to cut a coin hub and 25-30 hours to cut a 3-inch die. These CNC machines are more efficient and can produce a better quality product than the retired Janvier Transfer Engraving Machines.

A Hubbing Press is used to transfer the design from a positive hub, created in Digital Process & Development on the CNC milling machine shown above, to a die blank creating a negative die. One pair of dies can be used to make hundreds of thousands of coins. Die Manufacturing employee Steve Jones walked us through using this 600-ton hydraulic press. It’s quick. The image from the hub to the die transfers is less than 1 minute.


The amount of tonnage used on the press depends on the hub and die denomination. The Mint keeps this chart handy.

Dies are inspected and, if needed, touched up using buffing tools.

Finally, every coin die is given its own unique serial number so it can be tracked throughout its lifetime. A laser machine is used to imprint the serial numbers.

To efficiently produce millions of quality coins safely each day, the dimensions of all hubs and dies need to be precise. Earl Sandt, Tool Maker, Digital Process & Development Division, walked us through several machines that get this job done.

Dies must be hardened to withstand the enormous pressure used to strike coins. For example, it takes 60 tons of pressure to create one quarter. Huge furnaces are used to get this hardening job done. With slight variations depending on the denomination, the average die is heat-treated at 1500°F for 2 hours and then manually quenched in a polymer solution.

After the dies finish in the vacuum hardening furnace, they are placed in the tempering furnace. Tempering reduces the internal stress in coinage dies after hardening. Generally, dies are tempered at 400°F for 5 hours.

That’s it for this article! Thank you for visiting CoinNews.net today and please come back again.

Return Friday, September 20, for the next article in our several part series about the U.S. Mint at Philadelphia. It’ll focus on the coining division with many more photos as well as a few short videos showing coins produced and moving around the plant floor.

Additional articles will describe the Mint’s numismatic processes and products, including the making of bullion and collectible America the Beautiful Five Ounce Silver Coins. To catch up on past articles about the Philadelphia Mint, links to them are found in the upper right of this page (below the Google map.)

Very Interesting,
For a contrasting view, have a look at how the UK Royal Mint does essentially the same process.
With some very old equipment
http://www.RoyalMint.com