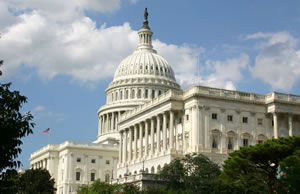 Legislation was introduced in both the House and the Senate on Friday, September 21, that would prohibit the payment of surcharges to private organizations or entities from the sale of U.S. Mint commemorative coins.

Instead, per the reform act, any net profit raised by the sale of these coins would be used to reduce the government’s deficit. The bills, titled Commemorative Coins Reform Act of 2012 and numbered S. 3612 in the Senate and H.R. 6495 in the House, were referred to committee.

In order for either bill to become law, it would need to pass in both the House and the Senate and then get signed by the President. The Senate version currently has seven cosponsors while the House bill has one.

Presently, the sale of commemorative coins helps raise money for various projects and organizations. For example, in 2010, the United States Mint produced the American Veterans Disabled for Life Silver Dollars as required by Public Law 110-277. By year’s end, approximately 267,740 coins sold*. With a surcharge of $10 per coin, about $2,677,400 was paid to the Disabled Veterans’ LIFE Memorial Foundation in order to help support the construction of the American Veterans Disabled for Life Memorial in Washington, D.C. In the same year 350,000 commemorative Boy Scouts of America Centennial Silver Dollars were purchased*, thus raising around $3.5 million that was paid to the National Boy Scouts of America Foundation, according to Public Law 110-363. Those funds were distributed as grants to local councils in hard-to-serve areas.

The purpose of the proposed bill is to eliminate earmarks. While those who are behind the act want to continue to honor outstanding people, events, etc. with commemorative coins, they want to limit the government’s involvement in specific projects that benefit the home districts and states of legislators.

In a press release Sen. DeMint relayed, "Congress has done great work on eliminating earmarks, but commemorative coins have become a way for politicians to continue steering federal benefits to favored projects. Congress can still issue commemorative coins, but the funds should go to deficit reduction instead of becoming a money-maker for private entities. If organizations wish to raise money for worthy causes, there are many ways available without the use of taxpayer resources."

"Congress found yet another way to circumvent the earmark ban with commemorative coins," Rep. Amash said according to the same announcement. "Organizations shouldn’t receive special treatment because of their D.C. connections. It’s far beyond the proper role of the federal government to act as the sales agent for private groups."

It should be noted that the U.S. Mint operates solely on revenue it makes from selling coins and numismatic products, and it does not rely on Congressional appropriations, that is to say income from taxpayers. It sells circulating coins at face value to Federal Reserve Banks, bullion coins at a bit over spot prices to its network of Authorized Purchasers and numismatic products at a premium to the public.

Using net income from the U.S. Mint to pay down the national debt is nothing new. Pursuant to the Mint’s annual reports, seigniorage obtained from selling circulation coins and numismatic products containing circulation quality coins goes to the Treasury General Fund as an off-budget receipt, meaning it is used to "reduce the amount of cash that Treasury has to borrow to pay interest on the national debt."

Gains from the selling all of the other numismatic products such as proof coins and proof sets, annual reports explain, go to the Treasury General Fund as an on-budget receipt. That means it can be used by the government either as current operating cash or to reduce the annual budget deficit.

If the Commemorative Coins Reform Act of 2012 passes in Congress and gets signed by the President, the excess funds raised by commemorative sales, after program costs are recovered, will be transferred to "the general fund of the Treasury for the purpose of deficit reduction."

*These are not final, audited figures.

Wow sales tax on coins (some states) surcharge ban, when will it end?? I wonder if the stone mt. comm. was used for mt rushmore.

So, the $10.00 that used to go to whatever organization, for each coin sold, will now stay in the collectors’ pockets? Well, I’ve heard of a bridge in Brooklyn, that’s for sale! When I’ve purchased commemorative coins that honored a moment in American History, or a significant event, I would buy them,based on what the price was. When I see a commemorative coin, that has a surcharge, I buy less of them. Why, because there is an extra charge, not tied to the value of the cost of making the coin. So, smaller charge, more coins bought! However, I don’t… Read more »

Victor. The $10 surcharge will be applied to the national debt. Earmarks to me means a politician taking money for their own intrest within a voting jurisdiction.

Surcharges from commerative coins should be subject to an audit by the GSA or IRS and the results of the audits reported to Congress and printed in the Congressional Record..Too many times we never know where the money goes. Perhaps we should ask for a coin to build a memorial to our parents and grand parents.. How many.5 star generals were there in the US military’s history? I an only remember three Eisenhower, McAuthur, and Pershing. So we are giving $3.33 for each coin to each of these generals? Enough is enough.. Congress should set guidelines for the premium that… Read more »

I don’t have a problem with any net profit from the sale of these coins going to the national debt – as the article pointed out it amounts to a drop in the bucket (only millions compared to trillions). But what the bill should do is eliminate the surcharges altogether, not address where the money goes. Isn’t this just what congress does – once money starts coming in they can’t just stop it, they have to find somewhere else to spend it. This bill isn’t going to change anything except where the money goes. And everybody seems to accept that… Read more »

For the good of our country, U.S.A.

So what kind of premium per coin will it take to just eliminate the national debt altogether? Someone good at math can calculate the wildly different estimates of the true national debt…. And let’s say divide that into the number of 1 oz gold eagles sold. You must count unfunded liabilities estimated to be north of $40 trillion that also comprise the national debt. Howsa ’bout a hundred thousand dollar premium on each gold coin? Would that do it? If that doesn’t take care of the debt, it will accomplish another unspoken goal… Keeping gold out of the hands of… Read more »

So, we’re all in agreement, knock off the surcharges, lower the price of the coins, except for authorizing the minting of coins and their subjects all politicians stick to what you know best! Absolutely nothing! I’ll go along with that!

Think about NFL and the MLB are getting coins when these are multi-billion dollar corporations that certainly don’t need money from these surcharges.

Mint coins have become overpriced and the designs are based on a committee – and you see what that gets us. I no longer by modern mint products – they are a waste of money.

Sounds like a tax increase to me, and those politicians signed a pledge not to increase taxes. Keep you political hands out of my hobby.

How are minting of coins using taxpayer resourses when the mint is funded by it’s own activities? So, let’s eliminate that part of all this. It starts out that money goes towards the deficit. Then it changes to go to the General Fund and is unrecorded and the spending increases as a result of the new source of revenue. Then surcharges get increased to the point collectors won’t tolerate it as too much of a good thing is never enough. Pet projects to certain districts brings up another issue with commermoratives the way they are currently done. I see collectors… Read more »

good points, all…. hasn’t congress got more urgent business than proposing coin subjects? seems that’s about all they ‘ve accomplished lately.
yes, commems are getting too expensive, and the subjects are of interest to only a very small audience… how many more military themed coins are needed?
I have several silver commems but there are only so many most of us can afford.

The surcharges have basically remained the same – $10 for silver coins, $35 for gold coins, since 1997 anyway (didn’t check any further back). Considering inflation and the rising prices of metals, the surcharge is one thing that has remained basically constant throughout the years. Still, I think it’s an expense we collectors can do without.

“How many.5 star generals were there in the US military’s history? I an only remember three Eisenhower, McAuthur [SIC], and Pershing.”

Sam, a quick Google check says there were 5 five-star generals, all during WWII: Eisenhower and MacArthur as you noted, plus Omar Bradley, George C. Marshall, and Henry “Hap” Arnold. The first four men were RA (regular army) while Arnold commanded the AAF.

Pershing held the special rank of General of the Armies, the same rank as that posthumously conferred on George Washington.

Now back to coins.

Still, forking over coin premiums to pay down govt debt is just a symbolic drop in the bucket with a publicly-admitted $16 trillion deficit. The actual deficit is likely multiples of that, given unfunded liabilities of Social Security, Medicare and the like. Ironically, much of the financial problem was caused by the failure to remember that only ‘gold and silver coin’ are genuine money, not paper money and not electronic money ‘printed’ from thin air. So sad.

I’ve got a few questions about these “surcharges”. I’ve always wondered if these monies were going to non-profit orgs? Also, suppose a collector doesn’t want to donate this “surcharge”? And if he or she does, how can it become tax deductable?. Now the pols want to use the monies to pay down the deficet. Is this a federal sales tax? Is it part of the total taxes paid to the feds for IRS purposes?. These pols are a true cancer to our society. Thats all I got. Thanks

“… forking over coin premiums to pay down govt debt is just a symbolic drop in the bucket with a publicly-admitted $16 trillion deficit.”
So true. Both candidates are trumpeting ‘finding millions in waste and fraud’ and ‘imposing minor fee increases’ when as you noted the actual hole is maybe 10^5 times as big. Ten bucks out of everyone who buys a commemorative coin is sure gonna take a whack at the debt, right?

Maybe once they kill PBS the government could raise funds by selling Big Bird Burgers.

Whether we like it or not, their not going to make the coin $10 cheaper. The ten bucks is going somewhere.