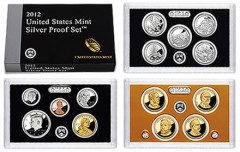 Orders reached 189,628 between its launch on Monday, June 4, through to Monday, June 11. The one-week total is an impressive start for the popular numismatic product, but it also represents the weakest one in years for the annual set.

One reason for the slower start this year is the same-week launch of the 2012 San Francisco American Silver Eagle Two-Coin Proof Set. (It has sales of 121,304 from its release on June 7 through to June 12.) Priced much higher at $149.95, collectors on a budget have a smaller four-week window to order it versus the more than one year time frame to get the 2012 Silver Proof Set.

Silver proof sets since 2010 have contained 14 proof coins in total. The Kennedy half dollar, five America the Beautiful quarters, and Roosevelt dime are each produced in 90% silver for a combined silver weight of 1.338 troy ounces. At the current spot price of $28.77 an ounce, these sets have a melt value of $38.50.