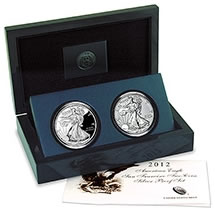 Released on Thursday, June 7, 2012 at noon ET, the United States Mint reported the set’s debuting sales at around 2:30 PM ET on Friday, June 8, 2012. A slice of that time was filled with customers who were hard pressed to place orders due to busy customer service lines and a slow or inaccessible ordering site.

The last instance in which collectors had experienced such ordering difficulties was during the release of last year’s 25th Anniversary American Silver Eagle Set. All 100,000 sold out in less than five hours. Given the similarities of release issues between both sets, it is actually a bit surprising that starting sales for this year’s issue did not come closer to the 100,000 mark.

Anyone with Internet access can monitor how the San Francisco Set sets are performing. A floating banner or sales odometer is located at the top of the set’s product page. The U.S. Mint indicates that it will update unit sales each weekday at around 3 PM ET.

The bureau provides qualifiers saying it is offering only an approximated total of unit orders "through all of its active sales channels" and that the data is for "informational purposes only and should not be construed to represent accepted orders or actual sales figures."

The banner also offers a countdown by displaying how many days are left to place an order.

On that subject, there are no unit limits for the 2012 American Silver Eagle San Francisco Set but its last day of sale is July 5, 2012 at 5:00 PM ET. Demand will determine the final mintage amount. Beginning shipping dates have moved at least twice, with the latest one back to the original published date of July 27, 2012.

I like the running total banner, even if it’s updated only once a day. Wish they used a similar banner or something else for all the coins and sets. Can’t wait until they switch over to their more modern website where I’m looking for an up to the second accounting of accepted orders and an unclogged website on opening day for a coin or set.

I like the daily tally, the coin set, the packaging and even the price I dont think is out of line, but the time limit and the no limit quantity are the best part. The 20th year set took four days to sell out and everyone who wanted one had their chance. Even with the economy the way it is the mint had to know that the 25th anniversary set at 100K units was way to low. Collectors love the silver eagle. But if you look at the eagle program in 06 07 and 08 they made 1/10W burnished platinum… Read more »

I disagree, the time limit and no mintage limit have the potential to destroy this set. The US Mint has a recent history of catering to the squeaky wheel and as such has managed to COMPLETELY DESTROY their First Spouse line (in less than a year), the Platinum Eagle line (after 2 yrs) and the ATB 5 oz line. Now they teter on the edge of destroying this new annual set. When products are “limited to the amount they can sell” they are NOT VALUABLE, because they are not scarce. People do not collect these coins because they look nice… Read more »

Ryan – Collectors collect, investors buy and sell. You’re confusing the two. I understand your concern as an investor, couldn’t care less as a collector. In fact having some of the rarest coins the mint has ever released is a real coup for a collector while having coins with little to no demand is death to an investor. Accept what you are and stop pretending to be what you aren’t. The mint is catering to the collector by not limiting the mintages. When it limits the quantity it’s catering to dealers and the after market where real collectors are forced… Read more »

Jim – Although I tend to agree mostly with your very well described separation between “collectors” and “investors”, I kind of agree with some of Ryan’s points, too. In my view, there is probably 20% “pure cpllectors” and 20% “pure investors” in coin collecting…and the great majority, like me, fall in the middle (60%). In my case, I have sold some of my vast coin collection items only once, and I made a nice profit, however even though I will never sell any again, I enjoy keeping up with how much my collection is worth. The U.S. Mint has to… Read more »

Jim – How does $150 for $60 of silver translate to the mint catering to the collector? As I see it, at those premiums the mint is only catering to themselves and wealthier collectors like you who can afford to be frivolous with their money. The consensus should be that if the mint chooses to remove mintage limits and thus devalue the product, then the overall sale price should reflect that so that real collectors who are not “closet investor” can also afford to participate. The problem with this program here is that nobody is keeping it real; everyone is… Read more »

Jim- P.S. From a pure collector’s standpoint I have to totally agree with Ryan.

OK, everybody likes a good deal; who knew that a gold or platinum eagle sold back in the 90’s would quadruple it’s metallic value today? I don’t deny collectors enjoy evaluating their collection or making that special purchase that turns out to be worth so much more later on, or getting hold of a coin that later on turns out to have added value based solely on its rarity. This is part of what makes collecting fun – and the pride if having a complete set, too. A dealer might buy the S mint eagle for clients unable/unwilling to do… Read more »

I really see this set as the mint trying to satisfy “costumers” (collectors and investors alike) who were not able to get last year’s set. And try to do it in a “fair” way… You have a whole month to buy them… I also argue that this set per coin is about the same, as the 2011 anniversary set “special” coins. Today you can get a bullion eagle for about $34.99, a proof from the mint at $59.99, and an uncirculated eagle for $45.95. That means that the “special” coins were for about $159.02 combined (price tag was $299.95), not… Read more »

I would hate to see the reverse proof become an annual coin too. First it was valued for it’s uniqueness and rarity and now that’s pretty much gone. Second, I don’t think the reverse proof is anywhere near as stunning as the frosted proof is and doesn’t show the detail in it’s mirror finished elements as well as the frosted proof does. It’s an offshoot from the frosted eagle line and if they try to sell it separately I think it’ll die out soon enough on it’s own. What I’d like to see is an inverse image proof coin (looks… Read more »

JIm, I’ve said this before on a few sites and believe it most certainly applies to your assessment of Ryan’s comments. As a relatively new coin “investor/collector” (in that order), I don’t (personally) know of any collector that is not concerned with the value of his collection. That doesn’t mean they don’t exist. However, in my opinion – That in itself makes him an investor. Maybe the original intent is for the love of the item collected. But EVERY collector I know – is concerned about the VALUE of the collection. Initially – yes, people may begin to collect things… Read more »

rpw – You make an excellent point. Thanks for the added insight.