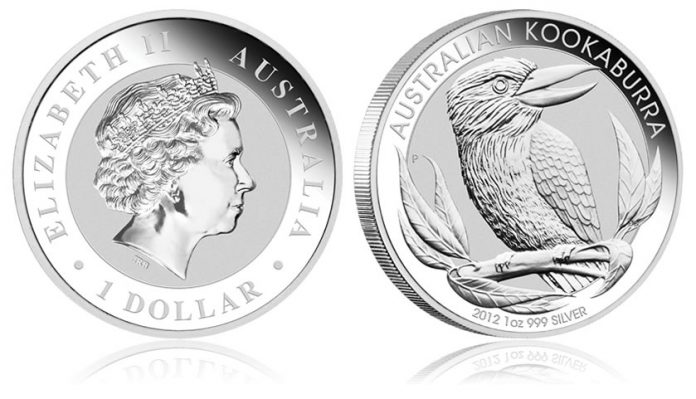 This release marks the twenty-third annual issue of the series as they date back to when the inaugural Kookaburra appeared in 1990. Since that debut, the coins have come to be one of the most sought after bullion strikes in the world. That fact is owed, in large part, to the Perth Mint’s policy of changing the reverse design annually to feature a new image of the kookaburra bird.

In addition, the Silver Kookaburra coin’s weight and purity are guaranteed by the government of Australia since the Perth Mint is the official issuer of the Australian Federal Government’s Gold and Silver Bullion Coin Program. Each coin also features a legal tender face value of AUS $30, $10 and $1, respective of their sizes.

The reverse of the 2012 Australian Kookaburra silver bullion coins contain the unique design by Darryl Bellotti which showcases the bird with its head looking to its left. The kookaburra is perched on a branch among several eucalyptus leaves. Inscriptions include: "Australian Kookaburra," "2012," "999 Silver" along with the size of the coin, either "1 Kilo," "10oz" or "1oz."

As legal tender of Australia under the Australian Currency Act of 1965, the obverse of each contains Ian Rank-Broadley’s effigy of Queen Elizabeth II of England. Her image is surrounded by the inscriptions "Elizabeth II," "Australia" and the face value of the coin – "30 Dollars," "10 Dollars" or "1 Dollar."

The Perth indicates that there will be a strict mintage cap of 500,000 one ounce Kookaburras with the 10 ounce and 1 kilo coins produced to meet demand. Each will ship encapsulated in protective acrylic capsules.

For reference, the mintage on the one ounce Silver Kookaburra since its introduction is shown below:

The Perth Mint of Australia was originally established as a branch of the Royal Mint of England in 1899. Its purpose was to refine gold from the nearby deposits of Coolgardie and Kalgoorlie.

In 1970, ownership of the facility was transferred to the Government of Western Australia. Today, the Perth continues to refine gold, produces blank planchets for other mints and strikes some of the most unique bullion and numismatic coins in the world.