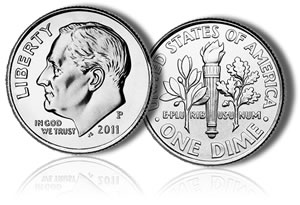 The United States Mint picked up its coin production pace in April 2011, snapping a streak of two monthly declines. Sharp increases in the amounts of pennies, nickels, dimes and quarters swung the month ahead.

The United States Mint struck 640.17 million coins for circulation, surpassing the previous month’s tally by 31.9 percent and year ago levels by 41.6 percent. An accomplishment yes, but April 2010 ranks dead last over the past twelve months while March 2011 registers at the low 11 spot. Further, while April 2011 marked a turnaround, its monthly total is a modest 8th best since last year.

The United States Mint was busiest producing smaller denominated coins. Lincoln cents led as they always do, with a monthly pick-up of 381.6 million. As a comparison, the one-cent coins failed to break the 340 million marker in each of the previous two months.

In a gigantic pivot, the US Mint produced more Jefferson nickels in April than it did during the previous two months combined (see figures from March here and February here). Kennedy half dollars remained silent, as they have been since January when the US Mint made a run of 3.45 million.

The two United States Mint facilities responsible for striking American circulating coins, the Philadelphia and Denver Mints, have not had closer production outputs all year. A mere 9.01 million coins separated them. Previous month differences between the two ranged from 93.7 million to 283.9 million.

The latest coin production figures provide no revelations in terms of finalized totals for upcoming America the Beautiful Quarters® or Presidential dollars, but they do show that the United States Mint has been busy striking them.

Subtracting the known mintage of the already issued Andrew Johnson $1 coins (72.66 million) from the year-to-date production of Presidential dollars (146.45 million) leaves a difference of 73.9 million. All, or at least a major portion of those will be Ulysses S. Grant Presidential $1 coins which are scheduled for a circulation release on May 19.

Likewise, taking the Gettysburg quarter and Glacier quarter mintages away from the combined year-to-date America the Beautiful Quarters’ total of 167 million leaves a balance of 44.2 million. That figure will be a slice of the mintage for the Olympic quarter which will launch into circulation on June 13.

For reference, the following table breaks out the United States mintage figures by coin design and denomination.