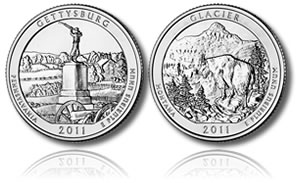 The Mint’s Authorized Purchasers (AP’s) scooped up 153,400 of 253,000 Gettysburg and Glacier five-ounce America the Beautiful Silver Bullion Coins on their launch day. The United States Mint began accepting orders for the two coins on Monday, April 25. 126,500 are available for each of the 2011 silver coins, which easily surpasses the 33,000 per coin mintages of last year’s issues which sold out with a combined total of 165,000. The AP’s have until Friday to make their buying commitment, making the first week of sales most interesting.

2011 America the Beautiful Quarters Silver Proof Sets make their first appearance in the sales tables at 78,054. The sets were released April 1, but the Mint atypically did not offer their sales numbers until this most recent report. The figure does not represent true demand, as the set is one of four that have been suspended since early last week as the Mint awaits a stabilization in silver prices to readjust its silver proof set prices. For a time this week, the melt value of the America the Beautiful Quarters Silver Proof Set was actually several dollars higher than its opening $41.95 price.

The United States Mint also released the opening sales figures for the 2011 American Gold Eagle Proof Coins which were released on Thursday, April 21. The 22-karat collector coins had a more difficult opening this year as their release competed against the extended holiday and historically high prices as a result of record gold prices. Their debut sales were weaker than last year but stronger than the proceeding 2008 year (the coins were cancelled in 2009).

The following tables show the latest bullion and numismatic coin sales figures as reported by the United States Mint: