Fewer and fewer American coins are getting minted this year for circulation, according to the latest coin production figures published by the United States Mint. 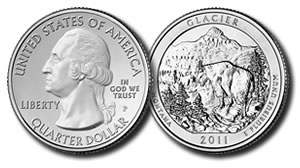 Those same figures reveal that the combined mintages for the Glacier National Park Quarter rank as the second scarcest in the America the Beautiful Quarters® series.

US Mint production in March retreated to 485.5 million coins, down from the more than 523 million coins produced in February and the nearly 765 million coins minted in January. While the Mint presses logged fewer hours last month, the level was higher than the same period of a year ago. But then March 2010 was the slowest production month for the US Mint in the past twelve months.

Although fewer coins were produced in March, the variety of denominations was greater than many past months. The only coin registering a zero increase in the production table below is the Kennedy half dollar. The Philadelphia Mint manufactured a token amount of Native American Dollars. And and always, Lincoln cents far outpaced other coinage as they accounted for 69.7 percent of the Mint’s output.

As mentioned, the debut Glacier National Park Quarter mintages were provided. The Glacier quarter was released into circulation on April 4, although the bulk of the coins remain in vaults at Federal Reserve Banks. The formal release ceremony for the quarter is being held later today at Columbia Falls High School in Montana.

In terms of mintages, the 61.6 million combined Glacier total falls directly behind the most scarce Gettysburg National Military Park Quarter with its 61.2 million total (revealed in February). In the notable column, the 2011-P Glacier quarter ties the 2011-P Gettysburg quarter as the most scarce quarter-dollar by mint facility. Each of the Philadelphia mintages stand at 30.4 million. It should be noted, however, that these numbers have the potential to increase since the US Mint has a bulk purchase program in place that permits businesses to buy past quarter designs for a year even when it has stopped delivering them to Federal Reserve Banks.