The United States Mint on Thursday, March 31, 2011, made available the Andrew Johnson Presidential $1 Coin Cover for a price of $19.95.

The 22,000 limited-edition product is the first of four 2011 issues in the American Presidency $1 Coin Cover Series and the seventeenth since the covers were introduced for the Presidents in 2007. The covers were priced $4 less in 2010 and $5 lower between 2007 and 2009. Production limits have been fluid, generally declining as the Presidential Coin Cover series gets older and prices get higher. 2007 and 2008 marked the upper end with limits of 50,000. 2009 retreated to 40,000 and 2010 fell to 32,000 units — although the Abraham Lincoln Coin Cover went up to 37,000 with expectations of increased demand. 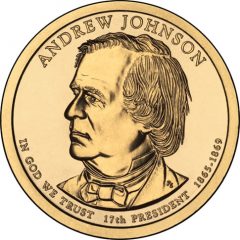 Both coins are framed within a display card featuring a portrait of the President. The card also includes a 44-cent Flag postage stamp with a postmark of February 17, 2011, Greeneville, TN. That is the date the dollars were released into circulation. The US Mint began offering $25 dollar rolls of the Andrew Johnson $1’s on February 23, 2011.

The obverse or heads side of the $1, designed and sculpted by Don Everhart, features a portrait of Johnson and the inscriptions “ANDREW JOHNSON,” “IN GOD WE TRUST,” “17TH PRESIDENT” and “1865-1869.”

The following is a brief biography of Johnson, as provided by the US Mint through its website.

Andrew Johnson was born in Raleigh, N.C., in 1808. His mother apprenticed Andrew and his brother to a local tailor following the death of his father, which left the family destitute. Shortly thereafter, he and his family moved to Greeneville, Tenn., where he opened a tailor shop and married Eliza McCardle. Johnson, an adept stump speaker, entered politics and served in the U.S. House of Representatives and Senate in the 1840s and 1850s. In 1864, the Republican Party nominated him for vice president.

Johnson became President following President Abraham Lincoln’s death in 1865. Highlights of his term include the acquisition of the Alaska territory and the Midway Islands. After leaving office, Johnson went back to Tennessee, remaining politically active. In 1874, Tennessee returned Johnson to the Senate, making him the only former President to have served in the Senate. He died a few months later, on July 31, 1875. 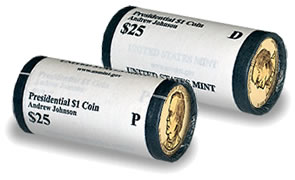 Presidential $1 Coins are produced for use in everyday cash transactions. To date, the Johnson dollar is scarcest with the lowest combined production total of 72.66 million. The 2011-P Johnson is the scarcest dollar coin of all at 35.56 million. The 2011-D Johnson Dollar at 37.1 million falls behind:

Buyers may place orders through the following:

A $4.95 shipping and handling charge will be added for domestic orders. No household limits are in place.